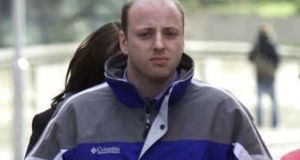 Eamon Dunne (42) was shot six times in the head and back in April 2010 while attending a birthday party in a pub in Cabra, Dublin. File photograph: Collins.

Irish Life was entitled to refuse to pay €250,000 life insurance for murdered gangland figure Eamon Dunne over his failure to disclose drug/alcohol misuse and depression when taking the policy out, the High Court has been told.

Dunne (42) was shot six times in the head and back in April 2010 while attending a birthday party in a pub in Cabra, Dublin. He was linked to a number of gang murders, drug trafficking and was on bail awaiting trial at the time of his death for the robbery of a cash-in-transit van in Kildare.

He had taken out the Irish Life Insurance policy, costing €103 a month, with his partner Georgina Saunders two years before his death.

Ms Saunders, with an address in Lanesborough Avenue, Finglas, Dublin, claims Irish Life failed to make payment wrongfully and in breach of the terms and conditions of the life insurance contract.

These included that in 2003 he had attended his GP who noted he was suffering from a number of problems including cocaine and ecstasy use, that he was depressed, had feelings of paranoia and was drinking excessively.

His GP told the court Dunne’s initial attendance at the surgery was in 2001 after a break-up with a previous girlfriend and he expressed suicidal thoughts. He was prescribed sleeping pills and anti-depressants.

He attended the GP a number of times in 2003 when it was noted he was “drinking eight cans a night” and snorting substantial amounts of cocaine.

He was no longer suicidal but was still depressed and had trouble sleeping and was referred to a psychiatrist in Grangegorman, Dublin.

Irish Life says in his insurance proposal form, Dunne had stated he drank six units of alcohol a week, never suffered from a mental or nervous disorder or had treatment for such a disorder in the last five years. He had also said he was not taking prescribed medication and did not take non-prescribed drugs.

The information he provided in the proposal form was entirely misleading and if disclosed it would have led to the policy being declined, Irish Life says.

Martin Duffy, Irish Life’s head of underwriting and protection of claims, told the court on Friday, because Mr Dunne was just 42 and died of multiple gunshot wounds, the company sought his medical records.

It was also learned Mr Dunne had two life policies with Zurich which had also refused to pay out on them, Mr Duffy said.

Asked by Mairéad McKenna BL, for Irish Life, would there have been a loading on the policy if his medical history had been disclosed, Mr Duffy said that would have been inappropriate. It would be “completely unacceptable from an insurance point of view” to accept him as a policy holder given the extent of illicit drug use and concerns about his mental health, he said.

Ms Saunders was recalled to the witness box on Friday at the request of the defence to address answers she gave for preparatory work on her legal action in relation to certain questions which the defence claimed should have been answered when the policy was taken out.

She told Remy Farrell SC, for Irish Life, she thought there was a misunderstanding in relation to these questions in the legal papers, known as “interrogatories”, as she was “literally confirming” the information.

“Maybe I did not understand it, I am not sure, but there were details about mental health issues and I did not know him (Dunne) back then and every answer was ‘yes’”, she said.

Mr Justice Tony O’Connor has adjourned the case to May for legal submissions.