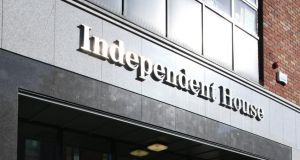 Independent News & Media is not appealing a High Court decision to grant the State’s corporate watchdog application to appoint inspectors to investigate the conduct of the affairs of the media group.

That means the inspectors - barrister Sean Gillane SC, who specialises in criminal law, and Richard Fleck, a UK based solicitor and corporate governance expert - can start work straight away.

INM, which had strongly opposed any appointment of inspectors,must also pay the costs of the application.

Its counsel Paul Gallagher SC today said it had no grounds to resist the appliaiton for costs, made by Neil Steen SC, for the Director of Corporate Enforcement (ODCE).

The president of the High Court, Mr Justice Peter Kelly, made formal orders, effective since Tuesday last, for the appointment of inspectors and awarding costs of the three day application for inspectors to the ODCE.

The head of the State watchdog Ian Drennan, who was in court today, initiated his application for inspectors earlier this year following his office’s year long investigation into matters raised in protected disclosures made in 2016 and 2017 by former INM CEO Robert Pitt and INM’s Chief Financial Officer Ryan Preston.

Arising from that investigation, the ODCE raised concerns about issues including an alleged data breach at INM in 2014. That involved data being exported from the jurisdiction and interrogated by third parties in what then INM Chairman Leslie Buckley, who stepped down last March, has said was a cost-cutting exercise called Operation Quantum.

Mr Drennan has said the purpose of the data interrogation “remains unclear but which certainly appears to be suspect and requiring further investigation”.

Earlier this week, the president of the High Court, Mr Justice Peter Kelly ruled the ODCE had provided evidence that “well justified” inspectors being appointed.

He was satisfied many questions “remain to be answered” about “disquieting” issues raised by the ODCE, including the alleged removal from INM, and interrogation, of the data of 19 persons, including journalists, former INM employees and executives and two senior counsel for the Moriarty Tribunal.

“What is alleged is very serious indeed,” he said.

The judge was also concerned about the circumstances concerning the proposed acquistion by INM of Newstalk Radio from a company of INM’s largest shareholder, Denis O’Brien, and the proposed payment by INM of a €1m ‘success fee’ to another company of Mr O’Brien’s.

While neither of those payments proceeded, they were “certainly suggestive of an unlawful purpose directed to the benefit of Mr O’Brien directly or indirectly and the detriment of the company”, he said.

The appointment was in the public interest in the context of the regulation of public companies, the nature of INM’s business and the importance of a free press, he also held.

The evidence suggested the rights and entitlements of some of those persons who data was allegedly accessed may have been transgressed in “the most serious way”.It also suggested the bills for the data interrogation were paid by a company beneficially owned by Mr O’Brien.

There was also evidence, based on texts and emails exchanged between Mr O’Brien and Mr Buckley, suggesting there may have been a breach of Market Abuse Regulations, he said.

On foot of the material before him, he found the ODCE had met certain criteria under Section 748 of the Companies Act 2014 for the appointment of inspectors.

After lawyers for INM sought time to consider his judgment and take instructions, the judge deferred until Thursday making formal orders.