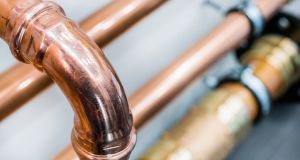 The judge said national regulations introduced in 2013 require householders to appoint a project supervisor to draw up a health and safety plan for all working on the site. Photograph: iStock

A householder was in breach of a duty in not appointing a project supervisor for health and safety when he got an extension built to his home, a High Court judge ruled.

However, homeowner Gerry Twomey, of Shanbally, near Lemybrien, Co Waterford, was not liable for an injury caused to a worker when a steel nail on a pipe nail clip sprang back and hit his eye as he tried to nail it into a wall, Mr Justice David Keane found.

The judge dismissed the action against Mr Twomey brought by plumber Pat McCarthy (62), Ballymacarby, Co Waterford, who also works as a water services manager with the Tipperary County Council.

Mr McCarthy claimed. among other things, that Mr Twomey failed to provide him with a safe environment and system of work, failed to appoint a project supervisor and failed to provide appropriate safety equipment in the form of goggles. He claimed he was a de facto employee of Mr Twomey.

Mr Twomey denied the claims and said Mr McCarthy was working as an independent contractor who held himself out as an experienced plumber with the appropriate expertise and equipment. He also claimed the accident was caused by Mr McCarthy’s own negligence and other failings.

Mr McCarthy, who earns around €5,000 to €7,000 a year doing plumbing work in addition to his council job, was asked to install a new plumbing and heating system as part of the Twomey house renovation. Mr McCarthy was introduced to Mr Twomey by a builder engaged to renovate the Twomey property.

On February 19th, 2015, Mr McCarthy was working under a worktop in the utility room fixing a pipe to the concrete wall with a plastic clip and steel nail. Although he had goggles in his van he was not wearing them and had never done so to affix a pipe clip to a wall.

When he struck the nail with a hammer, it sprang back hitting him in the right eye. Part of his iris came out in his hand and when he got to hospital, ten sutures were inserted to repair the laceration to the right eyeball.

While it is hopeful that laser eye surgery can be carried out in the future, for the present he has less than 6/60 visual acuity in his right eye — meaning he has the abiliity to only read the single large letter on the top line of a chart in a standard eye test.

He said that because of the injury reading and use of computers has become slower and nighttime driving difficult.

He was out of work with the council until April 2017 and did not return to part-time plumbing work until 19 months later.

Mr Justice Keane said national regulations introduced in 2013 require householders to appoint a project supervisor to draw up a health and safety plan for all working on the site. While not required for DIY projects or one-off small jobs, it is required where construction lasts longer than 30 days or 500 “person days” (number of days the work takes multiplied by the number of people doing the work).

Mr Twomey breached his duty to appoint a project supervisor, that did not cause Mr McCarthy’s accident, the judge said.

Mr Twomey was also not Mr McCarthy’s employer and did not owe him a statutory duty.

For those reasons, the claim could not succeed and he dismissed the case.