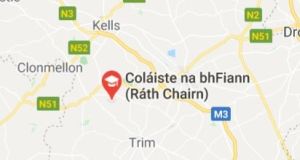 A proposed development of 30 houses and a guesthouse for the Ráth Chairn Gaeltacht, Co Meath, has been challenged. Map via Google Maps

A High Court challenge has been brought aimed at overturning planning permission for a proposed development of 30 houses and a guesthouse in the Ráth Chairn Gaeltacht in Co Meath.

Comharchumann Ráth Chairn, a local development co-operative charged with implementing a language plan to increase the amount of Irish in the area, secured leave on Tuesday to bring the judicial review proceedings.

The action is aimed at quashing An Bord Pleanála’s June 2020 permission for the planned development, on a site between the local primary school and community centre.

Seamús Ó Tuathail SC, with Dáithí­ Mac Cárthaigh BL, instructed by Colm McGeehin, of Prospect Law solicitors, outlined grounds of challenge including that the board had erred in not holding that a language impact statement (LIS) submitted on behalf of the developer, Colm Griffin, from Ráth Chairn , was inadequate.

The author of the LIS had no qualifications in language planning or social linguistics and the LIS is inadequate for reasons including it underestimated the numbers who speak Irish in the locality, it is claimed.

A planning condition that 70 per cent of the 30 houses be provided for Irish speakers “unless otherwise agreed by the developer and the Council” amounted to an unauthorised delegation of the Board’s powers, it is also claimed.

Among other grounds of challenge it is alleged rights of the applicant as a linguistic minority have been violated, particularly the right not to be assimilated. Ms Justice Bronagh O’Hanlon said she was satisfied to grant counsel’s ex parte (one side only represented) application for leave for judicial review of the Board’s decision.

A hearing date will be fixed at a later stage.