Girl awarded €70,000 over alleged delay in diagnosis of hip condition

Settlement, against the HSE, was made without admission of liability, court hears 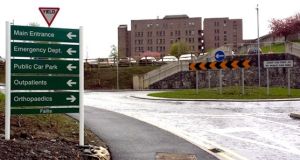 Lailia Greenwood, of Ballymote, Co Sligo, through her mother Natasha Healy, sued the HSE over her care and the alleged delay in diagnosing left developmental dysplasia of the hip at Sligo University Hospital.

A girl who allegedly suffered delay in diagnosis of a congenital hip dislocation has settled her High Court action for €70,000.

The settlement, against the HSE, was made without admission of liability, said Jonathan Kilfeather SC, for Laila Greenwood, now aged five, said.

Counsel told the court a ‘click’ was noted in Laila’s hip area when she was assessed a day after she was born at Sligo University Hospital.

It was only when she was 18 months old and had an X-ray that the dislocation was discovered in her left hip, he said.

He told Mr Justice Kevin Cross their case was, once the click was heard during the baby’s assessment at a day old, she should have been referred for an ultrasound scan.

Experts for the HSE disagreed and contended the click sound does not indicate dislocation, he said.

Lailia, of Ballymote, Co Sligo, through her mother Natasha Healy, sued the HSE over her care and the alleged delay in diagnosing left developmental dysplasia of the hip at Sligo University Hospital.

Laila was born on November 26th, 2015 by caesarean section.

In the action, it was claimed she was assessed and her left hip was found to be of concern. It was noted there was a click within one day of birth which, it was claimed, is an indication of instability in the hip joint.

It was claimed there was failure to act upon the finding or arrange an ultrasound scan.

Laila’s mother noticed, when her daughter was 14 months old and had begun to walk, that she was dragging her leg.

After a visit from a public health nurse, Laila was referred for an X ray and to a specialist.

On May 30th, 2017, at the age of 18 months, she was diagnosed with a dislocated left hip. She later had to have surgery to reduce her left hip and was in a cast for about 12 weeks afterwards.

Mr Justice Kevin Cross said it was a good settlement and he approved it.