Family of woman who died in hit and run secures €135,000 settlement 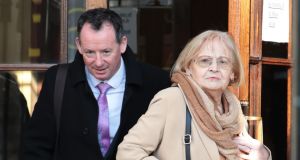 The family of a woman who died after being thrown nine feet in the air in a hit and run accident has secured a €135,000 settlement at the High Court over her death.

Caroline Watkins (40), a mother of one, was fatally struck by a car while crossing the road at the Goldenbridge Luas stop on Davitt Road, Drimnagh, Dublin, on May 30th 2014.

The High Court was told on Wednesday the driver of the car did not stop and remains untraced.

As a result, the €135,000 settlement was made against the Motor Insurers Bureau of Ireland (MIBI).

Ms Watkins’ daughter Ella Watkins, Esker Glebe, Lucan, Co Dublin, who was just ten years old when her mother died, had, through her grandmother Ethel Watkins, sued the MIBI on behalf of her family.

It was claimed the untraced driver was driving in a dangerous and careless manner and failed to stop, slow down or swerve to reduce the impact of the collision.

Seeking approval of the settlement, Micheál Ó Scanaill SC, with Bonnie Hickey BL, for Ella Watkins, said the family were traumatised by the fact the driver failed to remain at the scene and remains untraced.

He said CCTV footage of the scene indicated Ms Watkins’ was across half of the carriageway at the time, was moving faster than a walking pace and the pedestrian light was not in her favour. Her partner had not attempted to cross the road, counsel added.

Mr Ó Scanaill said another driver had provided evidence she had to brake when Ms Watkins came onto the carriageway.

It was believed the car which hit Ms Watkins was travelling at 55 km /h in a 50 km/h zone, he added.

Ella, who is now aged 16 and living with her aunt, is “an incredible well rounded individual”, he said.

An inquest into the death of Ms Watkins had heard she and her partner were on their way home to Ballyfermot from a pub in Inchicore at about 10.30pm and had decided to walk to Davitt Road to get a taxi.

When they reached the Goldenbridge Luas stop, they got to the edge of a pedestrian crossing and waited but Ms Watkins then stepped out onto the road.

The inquest was told she was struck by the bumper of the car, before hitting the bonnet and windscreen, and was propelled forward, landing about thirty feet away.

A postmortem found she died of multiple injuries caused by the impact.

Approving the High Court settlement, Mr Justice Kevin Cross said he could understand the anger, upset and annoyance of the Watkins family where the driver absconded and “did not face the music.”

The driver “showed no courage” but the CCTV footage showed Ms Watkins was “in a bit of a hurry” and had to cross the road through traffic coming both ways, he said.

The red light was against her and she “took a chance”, the judge said.

Had the case gone to hearing, a court must find fault with Ms Watkins crossing the road when she did and the settlement represented 40 per cent of the full value of the case, he added.