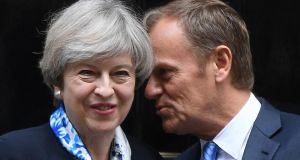 An early hearing is being sought in a High Court action seeking to establish if Britain can halt Brexit after triggering article 50 of the Lisbon Treaty.

The action is by a number of Green Party leaders in Britain and Northern Ireland, along with British barrister Jolyon Maugham QC.

At the High Court on Thursday it was briefly mentioned by Ronan Lupton BL to Mr Justice Seamus Noonan, who adjourned it to April 24th.

The plaintiffs want the court to set an early date to hear a motion seeking to have the court make directions for exchange of legal documents with a view to getting the earliest possible date for a hearing of the full case.

Among the directions sought is whether the proceedings should be served on the British government.

The plaintiffs also want the Irish court to decide whether the Court of Justice of the EU should determine legal issues in the case.

Mr Justice Noonan said he considered the directions motion was a more appropriate matter for the president of the High Court, Mr Justice Peter Kelly, to deal with but that was for Mr Justice Kelly to decide.

The defendants are Ireland and the Attorney General.