The Medical Council sought High Court confirmation of the conditions 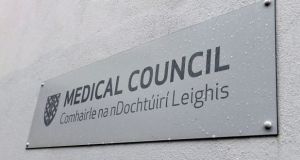 When the doctor’s case came before the council’s Fitness to Practice Committee last October, it heard evidence of a prior history of non-compliance with medication and of a near 100 per cent chance of relapse if he failed to take his medication. File Photograph: David Sleator

A doctor with a history of mental illness has had conditions aimed at ensuring the safe management of his illness attached to his registration.

The Medical Council sought High Court confirmation of the conditions to ensure his illness would remain controlled through medical treatment and oversight and there would therefore be no threat to public safety.

The president of the High Court, Ms Justice Mary Irvine, said on Monday she was satisfied to confirm the conditions as proportionate and necessary for public safety.

This was for reasons including evidence that an unsupervised compliance with medication was considered unlikely due to his lack of insight into his condition, she noted.

The judge has ordered nothing can be published that might identify the doctor, his specialty or the hospital where he worked.

Earlier, J.P. McDowell, a solicitor for the council, referred to evidence the doctor suffers from a relevant medical disability within the meaning of the Medical Practitioners Act but, provided he takes prescribed medication, he can safely practice medicine.

When his case came before the council’s Fitness to Practice Committee last October, it heard evidence of a prior history of non-compliance with medication and of a near 100 per cent chance of relapse if he failed to take his medication. When he takes his medication, he is fit to practice safely and he is currently compliant, the committee heard.

The committee recommended conditions be placed on his registration and the council had adopted those, with some small variations, Mr McDowell said.

The conditions include that the doctor will remain under the supervision of the council’s health committee and will accept certain treatments on a monthly basis, such acceptance to be confirmed in writing. They also authorise his treating consultant to alert the committee should he cease to accept that treatment or has been discharged.

He is also required to inform his GP, psychiatrist, employer, and prospective and future employers, of the conditions.

Because he had not appealed against the proposed conditions, his case was before the High Court for confirmation of those unless the court believed there was good reason not to do so.

In her ruling on Monday, Ms Justice Irvine said she was satisfied issues of public safety are engaged where the doctor suffers from a disability that may impair his ability to practice medicine and where there is unchallenged evidence he has little or no insight into his condition and about the need for appropriate medication.

There is evidence, provided the doctor takes his medication, he is well and can safely practice, she noted.

The concern was to ensure that he practices without presenting a risk to public safety and the proposed conditions bore a logical connection to the very important role of public protection, she said. While the doctor had asked that he should not be required to notify prospective and future employers of the conditions, the council was satisfied that was also necessary for the safety of the public, she noted.

She was satisfied to make all the orders sought.