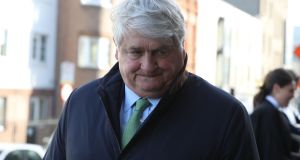 Businessman Denis O Brien at the Four Courts on Thursday, the day before his defamation case ended. Photograph: Collins Courts

Businessman Denis O’Brien could face a legal bill of up to €1 million after losing his defamation case against the Sunday Business Post.

A High Court jury, by a majority verdict of at least nine to two, dismissed his case on Friday afternoon after considering their decision on the 17-day case for more than seven hours.

Describing the result as “a great day for Irish journalism”, the newspaper’s former business editor, Tom Lyons said: “We told the truth, did the right thing and thankfully the jury came down on our side.”

The newspaper’s former editor, Ian Kehoe said: “This is about the right of every media organisation in this country to publish what is genuinely in the public interest and of public importance.”

Responding to the verdict, Taoiseach Leo Varadkar said a review is being carried out on Ireland’s defamation laws, but he accepted that the rules in Ireland are “more restrictive than they are in other countries”.

“But we always have to balance the need for free speech and the need for a free press but also the need to protect people’s privacy and people’s reputations,” he said in Belfast on Friday evening.

He added, “Where organisations or journalists do publish things that are untrue and are damaging they can really hurt people. So we need to get that balance right.”

The billionaire businessman, who gave several days of evidence, attended each day of the case but was not in court on its final day. The eight male and three female jurors delivered their verdict just after 4pm.

On foot of the verdict, Mr Justice Bernard Barton dismissed Mr O’Brien’s claim and awarded costs against him. The combined costs could be between €750,000 and €1 million.

Meanwhile, the Supreme Court will rule next Tuesday on Mr O’Brien’s appeal over the rejection of his challenge to statements made in the Dáil about his banking affairs.

That judgment was to have been delivered last Wednesday but, at the request of Mr O’Brien’s lawyers last Monday, the Supreme Court agreed to defer it because of the defamation case.

In the case, Mr O’Brien had sued publisher Post Publications Ltd over articles published over six pages on March 15th, 2015 where he was named as among the 22 biggest borrowers from Irish banks in 2008.

The bulk of them were written by Mr Lyons after he got a copy of a confidential PwC report given to the government in November 2008 which looked at the exposure of Ireland’s banks in 2008.

The jury rejected claims by Mr O’Brien that the articles, including ones headlined “22 men and €26 billion” and “The Gang of 22”, which featured him as one of the borrowers, had meanings which defamed him.

Welcoming the result, Siobhán Lennon, chief executive of the Business Post, highlights the “significant constraints” on the Irish media “to provide robust, objective and fair scrutiny of the stories that matter.