David Hall has no confidence in Console founder Paul Kelly 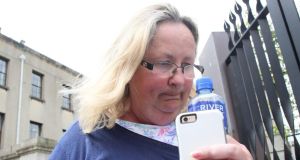 Patricia Kelly of Console Charity and wife of Paul Kelly is seen leaving the Four Courts on Tuesday after a High Court hearing. Photograph: Collins

Interim boss of the Console charity, David Hall, has told the High Court he has lost any remaining confidence in its founder Paul Kelly after a search of a lock-up revealed numerous documents, cheque books and keys which were discovered following a tip-off from a member of a public.

As a result, Mr Hall applied to extend injunctions obtained last week against Paul Kelly and his wife Patricia freezing their access to the charity’s accounts.

Mr Hall told the court it appeared the founders of Console had engaged in a tactical and considered web of deceit while engaged in prolonged abuse of public trust and public money.

The court heard Mr Kelly has been admitted to a psychiatric facility and his solicitor James McGuill was given a week to take instructions and reply to the proceedings.

Mr Justice Paul Gilligan granted the extension of last week’s injunction to include all the Kellys’ assets.

He also ordered that their son Tim Kelly be joined as a fourth defendant in the action.

The third defendant, Mr Kelly’s sister Joan McKenna, who denies she had any involvement in running the Console company, did not oppose the continuation of injunctions against her.

Martin Hayden SC, with Keith Farry BL, opposed an application to have to injunctions discharged against Ms McKenna on the basis that a number of Companies Office documents were signed in her name. Ms McKenna claims these were forgeries.

In an affidavit, Mr Hall said Tim Kelly appears to be the link between the Irish Console and its UK counterpart which the court heard last week was involved in transactions involving thousands of pounds for services supplied by the Irish company.

Mr Hall said investigations to date revealed there appeared to be €1,500 in a Paypal account for donations from the public to console but he now required an order from the court that he be provided with login details, access codes or passwords. The judge also granted that order.

Enquiries had revealed a strong and indisputable link between the UK sister charity called “Console Suicide Prevention Ltd” and Console in Ireland.

Investigations showed the son, Tim, appeared to be the link between the two, he said.

A review of the UK charity’s accounts appeared to show Tim Kelly runs the UK branch and has access to a credit card of Console in Ireland which showed expenditure by him from 2012 to 2014 of €77,597, apart from the 2015 expenditure.

As a result, he was seeking the joining of Tim Kelly as a defendant and due to concerns that such spending may not have been to the benefit of the charity.

Mr Hall also said Mrs Kelly acted in contravention of last week’s court order and acted in bad faith because she appeared to have given instructions to solicitors, who acted for her before Mr McGuill took over, saying that the only records in existence were those handed over to him (Hall) last Saturday.

This was despite her previously having been aware and/or being involved in the set up of the storage facility in Naas, Co Kildare.

He had lost faith in the bona fides of the Kellys and he was concerned they may seek to move further assets beyond the control of Console.

Mr Hall also said he was shown CCTV footage of Mr and Mrs Kelly at the storage facility in Naas which was only known about because of the valuable information from a source who was to be thanked as it will have a huge benefit in protection the charity and its services.

He said when he and four gardaí arrived at the lock-up, they found so much material which were evidently connected to Console that a van rather than a car was required to transport them.

While he had not had a chance to review the material yet, and it was in the custody of information technology experts, it included 300 hanging folders for filing cabinets, 30 desk folders, 50 ring binders, a laptop, 25 cheque books, a petty cash box, 40 keys and a briefcase.

Mr Hayden, for Console, opposed an application for a two week adjournment of the injunction against the Kellys, sought by their solicitor Mr McGuill, because his client had found the two defendants to be “extremely untrustworthy”.

Mr Justice Gilligan gave Mr McGuill, who said he would not be able to take instructions from Mr Kelly without medical clearance, until next Monday to deliver his replying affidavits and the matter will come back to court on Tuesday next.

The judge said his orders remain in place against Mr and Mrs Kelly until the full trial of the action takes place.

The orders cover any companies the Kellys were involved in any way connected to Console and the transfer of any assets by all three Kellys since January 2013.

Mr McGuill was given liberty to apply next Tuesday, if he receives such instructions, to vary the orders so the Kellys can get living expenses.