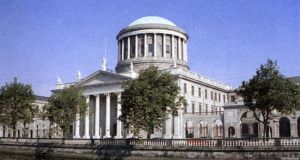 The father had opposed the treatment on grounds of limited chance of cure and because the child had not reacted well to earlier chemotherapy.

A five-year-old boy who has cancer with a low survival rate is to have high dose chemotherapy and other treatments urgently in line with the wishes of his mother and treating doctors but against the wishes of his father, the president of the High Court has ordered.

Mr Justice Peter Kelly said he wished the child well, as did all concerned for his welfare, and hoped the curative intent treatment (CIT) will achieve a cure. “A 10-20 per cent chance of cure even with the undoubted horrible side effects of the treatment is to be preferred to the virtual certainty of death.”

The treatment will be carefully monitored and will be discontinued if it proves ineffective or the child cannot tolerate it, he stressed. The father had opposed the CIT treatment on grounds of limited chance of cure and because the child had not reacted well to earlier chemotherapy.

He wanted the boy to instead have palliative intent management and to enjoy what he believed would be the boy’s last Christmas with the family.

He said he had told his son, who appears well at present and is asymptomatic, he would not be subject to further chemotherapy. After intensive discussions, the father had reluctantly agreed before the court the proposed treatment could take place after Christmas but the treating consultant said deferral to 2020 would be with palliative intent because of the risk of the tumour becoming active again and the proposed CIT is already two months behind the recommended time because of the efforts to reach a consensus between the parents.

The boy had told a child psychologist he has “kid cancer” “all around my body” and does not want any more “chemo”.

He also said, if the cancer did not go away “on its own”, he might have chemo, immediately changed his mind about that, and was aware his parents disagreed about more chemo.

His father had given him CBD oil for the cancer, he also said. In his judgment, Mr Justice Kelly noted the hospital took High Court wardship proceedings following its inability to secure agreement between the parents on treatment. The boy was made a ward of court and his views were represented by the general solicitor for wards of court.

The judge stressed he accepted both parents love their son and want the best for him. The judge concluded on the evidence it was in the boy’s best interests the CIT should be proceeded with. There is “a strong legal presumption in favour of taking all steps to preserve life”, he said.

While that presumption is not irrebuttable, the medical experts unanimously believe, on balance, the CIT treatment should proceed, he said. It would be in line with well-established protocols, will last a year if carried out in full and is “mainstream treatment and not experimental”.

While the survival rate is as low as 10-20 per cent, there is a “realistic possibility” of cure and not to have the CIT meant no such possibility. He found the mother had taken a “balanced and rational” approach and she could understand the importance of the child enjoying Christmas “but not at the price of losing future Christmases”.

The father had been “rather more affected by emotion and sentiment than by reason” and had a “very fixed” view on the matter. His wish to give his son a last enjoyable Christmas presupposed the tumour does not become active and his belief in CBD oil was not based on any medical evidence. In relation to the boy’s views, the judge believed he was influenced by his father’s approach to “no more chemo” and lacks the maturity or insight to understand his position.

The first element of the treatment is for one month and it could be finished by late November with the effect the boy may have an enjoyable Christmas without treatment, he said.

The boy was diagnosed with a paediatric cancer (HRN) in October 2018. Following an inadequate response to induction chemotherapy, his diagnosis was reclassified as very high risk neuroblastoma (VHRN).

Because of the boy’s inadequate initial response to treatment, his consultant oncologist proposed to further intensify the chemotherapy. That approach was endorsed by other consultants, including from Great Ormond Street Hospital for Children in London.

The evidence was the proposed CIT is likely to extend survival time and it was recommended on balance by the treating team whose recommendation was accepted by the mother but not the father.