O’Donnells ordered to pay all costs in failed eviction case

Retired solicitor Brian O’Donnell and his wife have been ordered by the High Court to leave their Killiney mansion in south Co Dublin within two weeks. Dan Griffin reports. 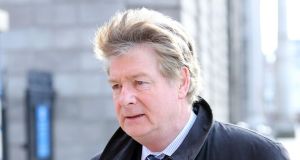 Solicitor Brian O’Donnell, seen entering the Four Courts on Wednesday, has lost his appeal against a High Court ruling ordering him and his wife to vacate their Killiney Mansion in south Co Dublin. Photograph: Collins. 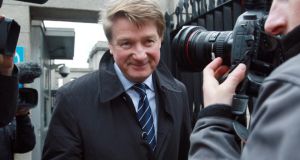 Brian O Donnell leaving the Four Courts on Wed) after a judgement in the Court of Appeal. Photograph: Collins 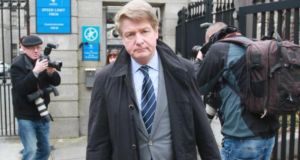 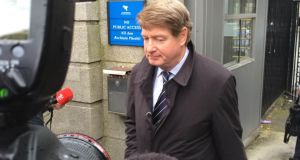 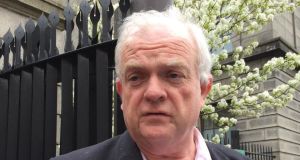 Retired solicitor Brian O’Donnell and his wife have been ordered by the Court of Appeal to leave their Killiney mansion in south Co Dublin within two weeks.

Mr O’Donnell and his wife Dr Mary Pat have also been ordered to pay all costs after they lost their appeal against a High Court order that they must vacate the former family home at Gorse Hill on the Vico Rd in Killiney, Co Dublin.

The Court of Appeal said they can remain there until noon on April 29th to allow them see if they can bring an appeal to the Supreme Court on a point of exceptional public importance.

During the costs hearing, Mr O’Donnell asked the court to extend the stay on the injunction to 12 weeks, saying he believed the process of seeking leave to appeal its decision at the Supreme Court could take longer than he initially thought. However the court refused, saying that was a matter for the Supreme Court, and maintained the two week stay.

Bank of Ireland, which is owed €71.5m by the O’Donnells, had earlier opposed the application for a two week stay on a High Court order that the O’Donnells vacate the property.

Cian Ferriter SC, for the bank, said it could mean they could ultimately remain in the house for an additional six to ten weeks.

However, Ms Justice Mary Finlay Geoghegan, presiding, said the court had decided to grant the stay, during which time the O’Donnells can consider Wednesday’s ruling and bring any appeal to the Supreme Court.

In dismissing the O’Donnell appeal, the three judge court ruled Bank of Ireland had made out its case that the O’Donnells had no right of residence in the house which was use used as security on the couple’s €71.5 million debts.

The court said the bank made a strong case against an Isle of Man company called Vico, which the Supreme Court had previously ruled owns Gorse Hill, and that the bank’s receiver Tom Kavanagh was entitled to possession of the property once Vico’s entitlement came to an end.

The bank had also made out a strong case that the receiver is now entitled to an order that the O’Donnells vacate the house.

They did not have a right of residence which extended in time beyond the right of Vico to possession, the court said.

Among the reasons for this, the court found, were the nature of ownership arrangements between the O’Donnells and Vico which had already been found by the Supreme Court.

There was also evidence Mr O’Donnell, as a partner in the law firm Brian O’Donnell and Partners, acted in connection with the taking out of a mortgage from the bank on the property in 2006.

That agreement required confirmation that there were no other claims over the property and that confirmation was given by Mr O’Donnell’s firm, the court said.

When the O’Donnells, in 2011, came to an agreement with the bank over their €71.5m debt they also agreed to give up immediate vacant possession.

While the O’Donnells now contend that agreement was procured by fraud, the court had to have regard to the present status of that agreement as valid and binding.

When the receiver was appointed in July 2012, the O’Donnells never brought proceedings themselves to prevent possession or, having becoming directors of Vico, got the company to take proceedings.

The court was satisfied the bank had established a strong case they are likely to succeed at the full hearing of the action. The court emphasised it was not dealing with the substantive issues but only dealing with maintaining the status quo pending that hearing.

The court also supported the High Court’s finding that damages would not be an adequate remedy for the bank if the injunction against trespass was not granted. It further held the balance of convenience favoured upholding the High Court order.

Mr O’Donnell made no comment upon leaving the Court, but Jerry Beades of the New Land League said he expected the ruling would be appealed.

“It is the intention of the O’Donnells to appeal [THE DECISION]to the Supreme Court,” he said.