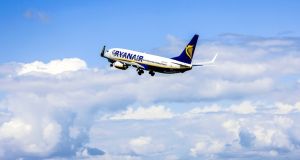 Ryanair claims it was defamatory because it wrongly meant the airline endangered passenger safety by operating a low fuel policy and by pressuring its pilots to take on as little fuel as possible.

Channel 4 is entitled to claim journalistic privilege over sources for a TV programme which Ryanair says is defamatory, a High Court judge ruled.

Mr Justice Charles Meenan was giving part of his decision in an application by Ryanair seeking discovery of documentation and material used in the making of the Dispatches ‘Secrets from the Cockpit’programme, broadcast in August 2013.

Ryanair says it was defamatory because it wrongly meant the airline endangered passenger safety by operating a low fuel policy and by pressuring its pilots to take on as little fuel as possible.

Channel 4 and the programme makers, Blakeway Productions, deny the claims. They say the words complained of were true, an expression of honest opinion, and fair and reasonable publication on matters of public interest.

Ruling on the pre-trial discovery matters, Mr Justice Meenan said the defendants were entitled to claim both journalistic and legal advice/litigation privilege.

However, in relation to legal advice/litigation privilege, he directed that the solicitor responsible for advising on the discovery process should swear an affidavit stating that he/she had inspected each of the documents over which such privilege was claimed.

The solicitor would then say whether each document had been properly categorised (as having such privilege).

The judge said Ryanair must have apprehended litigation would arise out of this programme because it was many months in the making. There was also the fact that Ryanair had previously initiated defamation proceedings over a Dutch TV programme with similar content to the Channel 4 programme.

The judge accepted therefore that documentation which came into existence as early as May 2013 would be entitled to the protection of litigation privilege.

On the issue of journalistic privilege, the judge said Ryanair had claimed Channel 4 was not entitled to rely on such privilege without swearing to the full details of the assurances of confidentiality allegedly given to each of its sources. There were four pilots featured in the programme whose identities were anonymised.

It was not incumbent on the court to embark on a exercise to establish what assurances were or were not given to sources, or whether they were sufficient to invoke the protection of journalistic privilege, the judge said.

The judge did not accept Ryanair’s argument that journalistic privilege was waived by “over-circulation” as it was readily apparent the processing of information from source point to broadcast point necessarily involves that information going through a number of hands.

He also accepted that the blacking out of certain information in documents by Channel 4, which Ryanair said was heavy handed, may be necessary so as to avoid the risk of identification.

The law said there was a balancing exercise in deciding journalistic privilege.

In carrying out that exercise, the judge said there could be no doubt the safety of passengers, crew and those living near airports, is a matter of most serious public interest. Ryanair was seeking to vindicate its good name.

It was not submitted or established that the identification of sources was essential for Ryanair to vindicate its good name at the hearing of the action.

Channel 4 has pleaded truth and the burden of defence rests with Channel 4 which means it would seem inevitable they will have to call pilots Goss and Van Zwol at the trial, he said. Ryanair intends to rely on reports of a number of aviation authorities in relation to the flying incidents.

It did not appear necessary to the judge for Ryanair to know the identities of Channel 4’s sources to establish the appropriateness of the airline’s work practices.

The judge also said that by invoking journalistic privilege, Channel 4 would be precluded from calling the four anonymous pilots without waiving such privilege. That may be of advantage to Ryanair at the hearing, he said.

The balance lay in favour of Channel 4’s assertion of journalistic privilege and he would not direct the production or inspection of documents over which such privilege was claimed.

The case comes back next week for mention.