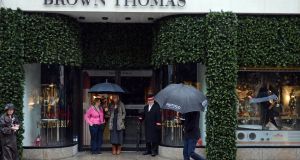 Dublin retailer Brown Thomas has been granted a full pub licence for its Grafton Street store.

Constance Cassidy SC told the Circuit Licensing Court that refurbishment on the third floor of the premises had been carried out in accordance with planning permission.

Ms Cassidy told Circuit Court President Mr Justice Raymond Groarke, who last month granted the store a Declaratory Order, that renovations and refurbishment had been completed and the store was now applying for a drinks licence.

The court heard the store had been operating a wine licence in its restaurant for the last 40 years and wished to broaden the offering for its customers, particularly those who who had to wait around while their partners and spouses finished shopping.

Architect Frank Kenny told the court that planning permission had been granted for a new kitchen and carvery area, dry goods and refrigerated storage areas, dining areas and staff facilities.

Lorraine Bedford, health and safety compliance manager with Brown Thomas, said the fire officer had inspected the premises and was satisfied works had been carried out according to the planning permission.

Ms Bedford last month told the court the store wished to make a full drinks menu, including beer and spirits, available to customers and those who, at the moment, just had to sit around while their money was being spent.

Ms Cassidy had told Judge Groarke that those in waiting could at least slightly anaesthetise themselves against what spouses and partners would spend.