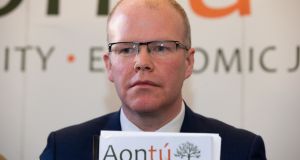 Aontú party Peadar Tóibín has withdrawn his application for a High Court injunction preventing tonight’s planned political leaders debate due to broadcast on RTÉ from going ahead.

Lawyers acting for the Meath West TD told Ms Justice Leonie Reynolds on Monday afternoon that after some consideration the application was no longer going ahead.

The court was told that the time constraints involved in bringing such an application were among the reasons why the former Sinn Féin TD was not proceeding with his action.

Speaking outside the court, Mr Tóibín said he was “disappointed” with RTÉ’s decision to exclude a representative of his party from participating in the debate on its Claire Byrne Live programme.

He said that with the level of preparation of documents involved, there was not enough time to have the action heard in advance of the planed debate.

It was “unfair” that Aontú cannot take part when other political groups with smaller or similar support were, he added.

Mr Tóibín said theree had been discussions about the debate between Aontú and RTÉ up until Tuesday of last week, adding that he had hoped those talks would have ended “amicably”.

He said he “radically disagreed” with RTÉ’s criteria for inclusion on the show, and add that other options were being considered, including referring the issue to Broadcasting Authority of Ireland (BAI).

Earlier, Louis Masterson Bl, instructed by solicitor Cormac O’Ceallaigh for Mr Tóibín, told Ms Justice Reynolds that it was hoped to formally apply for the injunction against RTÉ during the course of the day.

Counsel said the proposed action was being brought arising out ofthe TD’s “exclusion from the debate” by the national broadcaster. The court heard he was going to look for an order preventing the planned debate, which the leaders of seven political parties are expected to participate in, from being broadcast.