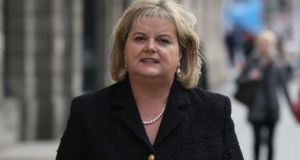 Angela Kerins, who resigned in 2014 as chief executive of Rehab, claimed damages on grounds including alleged personal injury, loss of reputation and loss of career. Photograph: Collins Courts

Former Rehab chief executive Angela Kerins could face a substantial legal bill after losing her High Court action against the Dáil Public Accounts Committee (PAC). She was seeking damages over the committee’s conduct of hearings concerning public money paid to the Rehab group.

The three-judge court ruled that, because the Constitution confers absolute privilege on “utterances” in the Oireachtas and before its committees, and the PAC was making no “determination” in relation to Ms Kerins, the courts cannot intervene in relation to the conduct of the hearings.

“For upwards of four centuries, it has been recognised in common law jurisdictions throughout the world that the courts exercise no function in relation to speech in parliament. This is fundamental to the separation of powers and a cornerstone of constitutional democracy,” the judges said.

“The Constitution guarantees freedom of speech in parliament, not to protect parliamentarians, but the democratic process itself.”

If members of the Oireachtas were constrained in their speech as Ms Kerins alleged, “the effective functioning of parliament would be impaired in a manner expressly forbidden in absolute terms by the Constitution”.

The European Court of Human Rights had also found a rule of absolute parliamentary immunity does not exceed the margin of appreciation allowed to member states in limiting an individual’s right of access to a court, the judges noted.

The judgment has implications for Oireachtas committees and may also affect a separate case taken by businessman Denis O’Brien over statements by two TDs in the Dáil about his banking affairs, on which judgment has been reserved pending the Kerins decision.

Ms Kerins, who was not in court, could face a six figure legal bill if the costs of the 10-day hearing are awarded against her. Costs and other issues will be addressed on February 21st.

She alleged she was so overwhelmed after the first hearing she attempted to take her own life some two weeks later and was too unwell to attend the second hearing. She sought damages on grounds including personal injury, loss of job and loss of reputation.

The PAC argued it is entitled to scrutinise how public funds are spent when some €80 million of public money is paid annually to Rehab companies.

Jurisdiction did not arise for reasons including that Ms Kerins attended voluntarily before the committee on February 27th, 2014, and because the Dáil Committee on Procedure and Privileges later ruled the PAC could not compel her further attendance and had no power to examine payments “by” Rehab.

To back up her claims that the PAC had no jurisdiction, Ms Kerins had argued that utterances by some committee members amounted to “some form of adjudication or determination”, the court noted. While some PAC members did express themselves in terms suggesting conclusions were being arrived at by them, those were “clearly expressions of opinion” by some “devoid of any legal force”.

Because they were “no more than utterances”, article 15.13, conferring absolute privilege over utterances in the Houses of the Oireachtas and its committees, the court’s jurisdiction was ousted.

A claim for damages arising from those utterances seeking to make the PAC amenable to the court’s jurisdiction “cannot be done”.

Ms Kerins wanted the court to analyse the utterances for bias, propriety and more. That invited the court to examine, discuss and judge words used in parliament which could not be done.

It would be “wrong”, the court stressed, to categorise this as a denial of Ms Kerins’ constitutional rights. In this instance, the custodian of those rights was not the court, but the Oireachtas itself by virtue of article 15.

The Oireachtas is required to uphold the Constitution and respect the rights of citizens, whether members of the Oireachtas or not, the judges noted. The fact there cannot be immediate recourse to the courts placed, if anything, “heavier onus” on the Oireachtas to ensure constitutional rights are respected.

Earlier, the court said it could “not be gainsaid” much of what was put to or said about Ms Kerins at the PAC hearings was damaging to her reputation, personally and professionally.

Among a range of matters, Ms Kerins – whose annual salary was some €240,000, plus an €18,000 car and €14,400 pension payment – was accused of being “overpaid”, on “a different planet” and of adopting double standards concerning her own pay and pay of other Rehab staff.

Ms Kerins was notified the first PAC hearing would address public payments “to” Rehab, the court noted. A “radically different” notification for the second hearing stated the PAC was examining use “by” Rehab of some €83 million in public money received annually.