Judge says it is a ‘ miracle’ no catastrophe occurred while flying low over 60,000 people 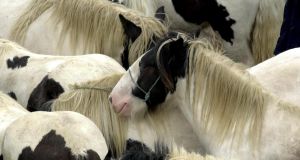 Ballinasloe Horse Fair: Judge Thomas O’Donnell said it was “an absolute miracle” a catastrophe had not occurred when the helicopter was flying low over the 40,000 to 60,000 people attending the fair. Photograph: David Sleator

A helicopter pilot has been fined €20,000 for flying dangerously low over thousands of people attending the busiest day of Ballinasloe Horse Fair three years ago.

Imposing the fines at Galway Circuit Criminal Court, Judge Thomas O’Donnell said it was “an absolute miracle” the pilot was not killed or an appalling catastrophe had not occurred if the helicopter had crashed while flying low over 40,000 to 60,000 people attending the fair.

Mannion was fined €10,000 for operating a helicopter in a public place at a height less than 1,500ft over a congested area of Ballinasloe town on October 2nd, 2011. He was fined an additional €10,000 for flying the helicopter within 150m of the radio mast at Ballinasloe Garda station.

Other charges
Three other charges relating to flying the helicopter in the vicinity of the town centre at such a height which would not have permitted, in the event of engine failure, for a safe forced landing to be carried out; to flying the helicopter over the centre of the town where a large crowd had assembled for the horse fair without the consent of the Irish Aviation Authority; and to flying it closer than 150m to a Ferris wheel at a funfair in the town where people had congregated were all taken into account.

Sgt Tom Horkan told the sentence hearing that numerous calls were made to gardaí and other emergency services that evening between 7.30pm and 8pm by people to complain about the low-flying helicopter.

Mannion, the court was told, had consumed a beer shandy with a meal in Athlone earlier that evening before flying home.

He then decided to fly to Ballinasloe and landed in a car park 30m from the Moycairn Lodge and Hotel near the town where he consumed almost two pints of lager.

He got back into the helicopter at 7.20pm, and took off in the direction of Ballinasloe.

The helicopter crashed in a field at 7.36pm, 10km from the town and 2km from Mannion’s home. He was found by neighbours in a shaken and disorientated state not far from the crash site, and chose to be taken home rather than seek medical advice.

Mannion told the court his licence had been suspended by the Irish Aviation Authority and he had no intention of applying for a new one.

He said he knew he was lucky to be alive and he apologised for his behaviour.

Weather closed in
He said the weather suddenly closed in seconds after he took off from the hotel, and he began to panic as he went into cloud and could not see the ground.

He claimed he used the lights of Ballinasloe town on several occasions to get his bearings, and that was why he flew low over the town.

At times, he said, visibility was down to zero and he was panicking.