Former garda who perverted course of justice now in custody 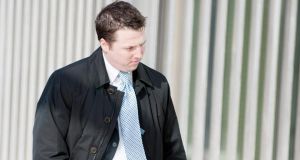 A former garda who perverted the course of justice on two occasions and admitted having cocaine for sale or supply has been remanded in custody for sentencing at a later date.

Stephen Cooper (29) allowed a friend take the blame when gardaí found the drug LSD during a search at the Electric Picnic music festival.

Mr Wolfe was collecting drinks from the car parked outside of the festival grounds and Cooper rang him from inside the festival security perimeter and asked him to bring Cooper’s wallet into the festival.

When gardaí stopped Mr Wolfe and searched him they found the wallet contained the controlled drug LSD, the court heard.

Mr Wolfe telephoned Cooper, who became agitated and Mr Barnett, who knew Cooper was a recreational drug user, agreed to “take the rap” and said the drugs were his.

Mr Barnett was prosecuted for possession of a controlled drug. He pleaded guilty at Portlaoise District Court and was ordered to pay €300 to the poor box.

Cooper also pleaded guilty to perverting the course of justice between August 19th, 2010, and October 21st, 2011, when he attempted to get Stephanie Lynch to make a false statement implicating Wayne Finane in the theft of a car.

On August 18th, 2010, Cooper was driving his own jeep when he saw Ms Lynch and Mr Finane driving

a second-hand car they had just purchased for cash in the city centre.

Cooper was with his then girlfriend, another garda, and he told her he recognised the car as being stolen.

He followed the car before stopping it and arresting the occupants. The next day Cooper invited Ms Lynch into Sundrive Garda station and put pressure on her to make a statement saying that Mr Finane had picked her up in the car and that she had no involvement in buying the car.


‘Criminal activity’
Det Garda Courage said he believed Cooper wanted to put pressure on Mr Finane to give him information about “criminal activity”.

As a result of this incident, gardaí began to monitor Cooper’s movements and the following January gardaí­ stopped him and found €700 worth of cocaine in his wallet. Cooper pleaded guilty to possession of cocaine for sale or supply at Ormond Quay, Dublin, on January 31st, 2011.