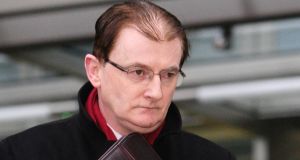 A former Anglo Irish Bank official had a “heated exchange” with his line manager after reporting concerns about the terms of loans to the “Maple 10” being amended to the bank’s chief financial officer, the Dublin Circuit Criminal Court heard yesterday.

Michael O’Sullivan, a former divisional lending director at the bank, said he repeatedly raised concerns with managing director of lending Pat Whelan about the fact that the bank’s ability to recover the loans, which initially amounted to some €600 million, had been weakened.

Mr O’Sullivan said he became “annoyed” about the matter during an asset review in October 2008 as it appeared the board of the bank was not aware that the terms of the loans had been altered earlier that month.

Mr O’Sullivan said that in December he spoke again to Mr Whelan about the amended loans not being properly authorised and got “no satisfaction” regarding his concerns.

He told a member of the bank’s group risk division about the matter on December 16th, 2008, and said he again raised the issue with Mr Whelan three days later.

Mr O’Sullivan then told the bank’s chief financial officer Matt Moran, who was at that stage in discussions about the recapitalisation of Anglo, about his worries on December 21st.

He said he subsequently received a call from Mr Whelan and that they had a “heated exchange” about his move.

Mr O’Sullivan told the court Mr Whelan was disappointed he had not come to him about it, to which he responded that he had done so “five or six times”.

“I felt compromised by what had taken place and that hadn’t happened in my 26 years in financial services,” he said.

Mr O’Sullivan said a fresh set of facility letters were issued the following month and that he believed nine of the “Maple 10” had signed. He said he visited several borrowers directly to get the revised letters signed.

The trial relates to three former Anglo executives – Seán FitzPatrick (65) of Greystones, Co Wicklow; William McAteer (63) of Rathgar, Dublin; and Mr Whelan (51) of Malahide, Dublin – who have been charged with 16 counts of providing unlawful financial assistance to 16 individuals in July 2008 to buy shares in Anglo Irish Bank, contrary to section 60 of the Companies Act.

Mr Whelan has also been charged with being privy to the fraudulent alteration of loan facility letters to seven people.

All three men have pleaded not guilty to the charges.

The court yesterday heard that Mr O’Sullivan had brought the business of the Quinn family to Anglo when his former employer Smurfit Paribas was acquired by Anglo in 1999.

Asked by Brendan Grehan SC, for Mr Whelan, if this was the case, Mr O’Sullivan replied “unfortunately, yes”.

He told the court of his shock when he learned the Quinns had built up a stake of some 28 per cent in the bank through shares and contracts for difference. “It was one of those moments you never forget in life,” he said.

Mr O’Sullivan also told the court of a meeting he and Mr Whelan attended at the office of the financial regulator in May 2008 to discuss the situation regarding lending to the Quinn family.

He said it was a positive meeting and that matters such as securities, funding and reducing the family’s exposure through asset sales or potentially the disposal of Quinn Insurance were discussed.

Before they left the meeting, Mr O’Sullivan said Con Horan, the regulator’s prudential director, asked about a €250 million guarantee linked to the Quinn Group and if Anglo might consider releasing the group from the agreement.

The court heard the guarantee was complicating the Quinn Group’s ability to sign off on accounts as there were fears that if the guarantee was called in it could lead to a default, which could potentially cause serious problems with the group’s other lenders.

Mr O’Sullivan said Mr Whelan agreed to look into the matter but no commitment was given.

Asked about his and Mr Whelan’s reaction to the request, Mr O’Sulllivan replied: “I think, to be fair, we were speechless.”

He said they had been discussing reducing the risk the bank was exposed to over the Quinn Group but his view was that such a move would increase it.

The Quinn Group had unsuccessfully approached Anglo with such a proposal less than a week before the meeting with the regulator, Mr O’Sullivan said.

Put to him later by Mr Grehan that both parties seeking the same measure in such a short time might not have been a coincidence, Mr O’Sullivan agreed.

The guarantee was released later that month.

Mr O’Sullivan agreed with Mr Grehan that the Quinn holding had the potential to destabilise the bank.

Mr Grehan said there were fears in the banking sector of contagion – meaning that if something happened in one bank it could have a domino effect in others.

Snapshots:
- Michael O’Sullivan said he was shocked when he heard the extent of businessman Sean Quinn’s bet on Anglo shares through contracts for difference. “We had a very good working relationship with Quinn Group. It was news to me, someone holding that level of shareholdings in the bank was a huge surprise.”

- Mr O’Sullivan said he was told in November 2007 that the financial regulator was “aware” of the CFD (contracts for difference) position.

- On May 8th, 2008, Mr O’Sullivan said, he accompanied Pat Whelan to a meeting with Con Horan, prudential director at the financial regulator, at the regulator’s office on Dame Street in Dublin. At this meeting, Mr Whelan outlined in detail the bank’s strategy on matters such as securities, funding and reducing the Quinn family exposure through asset sales. “I would have thought it was a positive meeting,” the witness said. “Everything I knew at that point was discussed by Pat Whelan and Con Horan.”

- For much of the meeting they had been discussing ways to reduce the risk the bank was exposed to over the Quinn Group; in his view, releasing the guarantee would increase that risk.

- Mr O’Sullivan said he became “annoyed” during an Anglo asset review in October 2008 as it appeared the board of the bank was not aware that the terms of the “Maple 10” loans had been altered earlier that month. Mr O’Sullivan said he told the bank’s chief financial officer, Matt Moran, about his worries on December 21st. He said he subsequently received a call from Mr Whelan and that they had a “heated exchange” about his move. “I felt compromised by what had taken place and that hadn’t happened in my 26 years in financial services,” he said.

- Lorcan McCluskey told the court he received “effectively a Mayday call” on St Patrick’s Day 2008, when he was told to return to the bank’s head office on St Stephen’s Green in Dublin to effect a €20 million money transfer to cover margin calls on businessman Seán Quinn’s contracts for difference (CFDs). The trial had previously heard that on March 17th, 2008 – referred to as the St Patrick’s Day Massacre – the value of Anglo’s shares fell by 30 per cent.

- Addressing the schedule for the coming months, Judge Martin Nolan told the jury that the trial would break during Easter, from April 15th to April 22nd. However, he warned jurors that if the trial was near the end at that stage, they might keep going, “so I wouldn’t advise you to book any holidays.”