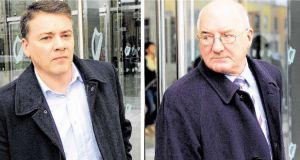 
Two former directors of Anglo Irish Bank face up to five years in prison after they were found guilty of providing illegal loans to 10 businessmen to buy shares in the bank in 2008.

After 17 hours of deliberation, a jury at Dublin Circuit Criminal Court found William McAteer (63) of Rathgar, Dublin and Pat Whelan (52) of Malahide, Dublin, guilty on 10 counts of providing unlawful financial assistance to the so-called Maple 10 investors in July 2008. The two men were found not guilty on six counts related to lending to members of tycoon Seán Quinn’s family.

All guilty verdicts were unanimous. Whelan and McAteer did not react in the dock as the jury forewoman confirmed the verdicts, and they made no comment as they left the criminal courts complex in Dublin.

The trial – the first to deal with events at Anglo, once Ireland’s third largest bank – lasted for 47 days and was the result of one of the biggest white-collar criminal investigations ever carried out here.

It was the first time anyone had been prosecuted under section 60 of the Companies Act, which prohibits a company giving financial assistance for the purchase of its own shares. Anglo’s former chairman Seán FitzPatrick was acquitted of all charges against him on Wednesday.

Judge Martin Nolan thanked the jury of seven women and five men for their service, for taking their role seriously and for taking time to consider their verdicts. He exempted them from duty for 10 years. He set a sentence date of April 28th and there was no objection to McAteer and Whelan remaining on bail until sentencing.


Quinn’s holding
The trial centred on a deal to unwind Mr Quinn’s holding in Anglo. The court heard that by July 2008, Mr Quinn’s stake in the bank through contracts for difference (CFDs) – investment products that involve betting on the performance of a share without buying it – were equivalent to more than 28 per cent of the bank’s stock. This was a serious concern for the bank as it was feared a disorderly unwinding of the CFDs could cause the share price to collapse and destabilise the Irish financial system.

A deal was devised which involved providing loans to 10 of the bank’s customers, known as the Maple 10, to buy just over 1 per cent each of the shares underlying the CFDs, with six members of the Quinn family buying another 15 per cent of the shares. The Maple 10 borrowed €45 million each. The Quinns borrowed €169 million.

A key difference between the lending to the Maple 10 and the Quinn family members was that the 10 investors were given loans at 25 per cent recourse, which meant that if the Anglo share price fell to zero the bank could only ever recoup a quarter of the value of the loans. The Quinn family loans were at full recourse.

The trial heard from some Anglo directors who said they believed the financial regulator was comfortable with the scheme, that legal advice had been obtained and that the investment bank Morgan Stanley, which was tasked with executing the transaction, had satisfied itself on compliance.


Legal advice
Judge Nolan told the jury that it did not matter whether the defendants believed the share purchase scheme was legal or illegal.

The attitude or actions of the regulator and any legal advice were also “totally irrelevant”, as was the involvement of Morgan Stanley.

In the absence of the jury, however, the judge indicated he may take these factors into account in sentencing.

In a statement, the Quinn family said they had been following the trial very closely. “The information that we have garnered will be of huge assistance to us in our forthcoming legal cases against IBRC (in special liquidation), Kieran Wallace, the Department of Finance, the financial regulator and the board of directors of Anglo Irish Bank,” the family said.

With the Anglo trial now concluded, work is under way to quickly establish the Oireachtas inquiry into the banking crash, although public hearings are still some time away.