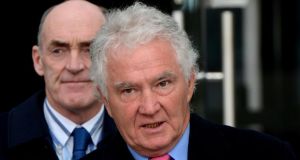 A request has been made to elect a trial judge to deal with disclosure and prevent “a media frenzy whipping up a lynch mob mentality” in relation to the upcoming trial of former Anglo Irish Bank executives.

The trial of the bank’s former chairman Seán Fitzpatrick and two former directors was before Judge Martin Nolan at Dublin Circuit Criminal Court today in order to check on the progress of the case.

Mr Fitzpatrick (65) of Whitshed Road, Greystones, William McAteer (62) of Auburn Villas, Rathgar and Pat Whelan (51) of Coast Road, Malahide have been charged with 16 counts of allegedly providing unlawful financial assistance to individuals to buy shares in the bank.

Judge Nolan said it was not the intention of the court to assign a specific trial judge now but rather that the case would be dealt with in the usual manner with other pending trials before the sitting judge in court number 5.

Lawyers for the men and for the State all stressed that that they felt it was necessary for the smooth running of the case to appoint a judge now to deal with the large volume of material and issues which may arise leading up to the trial on January 14th next.

Brendan Grehan SC, defending Mr Whelan, said “I don’t think this case can be progressed to trial without a judge taking charge of it now.”

He said applications are going to arise, “apart from issues of relevance and privilege” in relation to disclosure in the case.

Counsel said it would also be appropriate to appoint someone to take charge of the trial now who can “give directions not just to the parties but also to the media”.

“In the six months leading up to the trial it is vital that an air of calm be restored to the public from which a jury will be drawn,” Mr Grehan said.

“We simply cannot have a fair trial take place where a media frenzy is whipping up a lynch mob mentality,” he continued.

He had earlier said that there had been “on-going matters in particular in the last month or five weeks of general adverse media coverage against a certain category of person that my client may fall into.”

Michael O’Higgins SC, defending Mr Fitzpatrick asked for a second hearing date to be set in September to deal with any issues that may arise between the defence and the State in relation to disclosure of evidence in the case.

Mr Grehan acknowledged “the best endeavours of the prosecution” to disclose the relevant evidence, while Mr O’Higgins also said that “the DPP was doing their best”.

Uná Ní Raifeartaigh SC, prosecuting, said the DPP had sought to “prioritise certain things”, which she said has been done now and the State are now moving to the issue of obtaining material from “a large number of third parties”.

“The issue of publicity is of concern to the DPP. It is important that in the last six months the media would be mindful in matters that may ultimately lead to the postponement of the trial,” counsel said.

The accused’s legal teams and the prosecution all stressed that they were anxious for the trial to proceed as planned in January.

However, Mr O’Higgins pointed out that he had concerns about media reporting prejudicing the trial.

He said given the recent coverage his client “would be in a strong position” to request that the trial not take place until next summer but said that was exactly what he did not want.

Mr O’Higgins said if there were further “elements of provocation” in reporting which he said was “calculated to impassion the public” the trial may not be able to go ahead.

Judge Nolan adjourned the case for mention to Tuesday to allow him time to ascertain what judge may be free in September to deal with a further disclosure hearing.