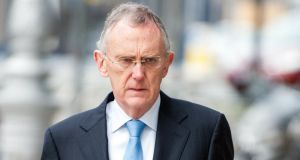 
A former director of Anglo Irish Bank has said he believed the financial regulator was told about the size of businessman Seán Quinn’s holding in the bank in late 2007 or early 2008.

Gary McGann, who is now chief executive of Smurfit Kappa, told the trial of three former directors of the bank that at a board meeting in late 2007 or early 2008, they learnt of Mr Quinn’s significant contracts for difference – investment products based on share price – in the bank.

The board told the chief executive of the bank, David Drumm, to inform the financial regulator, he said. He understood the regulator – Patrick Neary – was informed and he understood he was “equally exercised” and he “pressurised management” into finding a solution.

Brendan Grehan SC, for Pat Whelan, asked Mr McGann if there was any suggestion that Mr Drumm should meet the regulator but not disclose to him the size of the Quinn CFD holding.

“I have no recollection of that. In fact intuitively I would have said the opposite,” Mr McGann responded.

Seán FitzPatrick (65), Greystones, Co Wicklow, Willie McAteer (63), Rathgar, Dublin, and Pat Whelan (51), Malahide, Dublin, have been charged with 16 counts of providing unlawful financial assistance in July 2008 to buy shares in the bank, contrary to section 60 of the Companies Act.

Mr Quinn’s CFD holdings were unwound in July 2008, with the Maple 10 businessmen buying 1 per cent each of shares in the bank and the Quinn children purchasing the balance, both groups using loans from Anglo.

Mr McGann, a non-executive director at the bank, said he was informed that a deal had been finalised by Mr FitzPatrick in a phone call about July 16th when he was on business in the Netherlands. He said he was at dinner when the call came through and he excused himself.

Mr FitzPatrick did not give him details of the transaction but said it had been completed, Mr McGann said.

He did not recall him mentioning lending to the Maple 10 investors or to how the Quinns would be funded.


Emails
Emails sent from Mr McGann to Mr Drumm on the evening of July 10th were opened to the court by Úna Ní Raifeartaigh SC, for the prosecution.

One read that Mr McGann had been “speaking to Seán on a couple of occasions about the plan execution”.

The email said: “You and the team are doing fantastic work in very trying circumstances and I just want to acknowledge that – we are all rooting for you! Keep up the good work.”

Another email from Mr McGann on the same evening said that when the deal was done, they needed to have “a credible explanation for how we got where we are, what we have done about it and whether the problem is solved”.

It said that in the “worst-case scenario”, they would have to explain “the totality”.

Mr McGann told the court he believed the unwind was complex and would have to be explained “to investors if not to others”.

He said he used the phrase “worst-case scenario” because total disclosure was always challenging, in his view.

In a responding email, Mr Drumm said they were handling each customer separately, they were “our closest personal relationships” and were “handpicked for that reason”.

“None of them knows who else or how much is involved,” Mr Drumm said.

“It is the best we can do but Pat [Whelan] and I both feel good about it.”


Some awareness
Also giving evidence yesterday, the head of markets supervision at the financial regulator’s office, Martin Moloney, said he was not surprised that some officials in his office had some awareness of Mr Quinn’s holdings in Anglo Irish Bank six months before he did.

Mr Moloney said he did not know about Mr Quinn’s CFDs until April 2nd, 2008.

Under cross-examination, he conceded he was the person with responsibility for transparency issues, but said CFDs were not regulated and he had very precise obligations under the EU transparency directive.

In a brief contribution yesterday, Mr Neary concluded his evidence under cross-examination by Patrick Gageby SC, for Mr McAteer.

He confirmed that a regulator might give “negative clearance” to certain transactions the office was informed about.

The case continues today at the Dublin Circuit Criminal Court before Judge Martin Nolan and a jury.