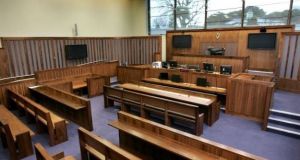 The boy, who cannot be named for legal reasons, appeared at the Dublin Children’s Court on Wednesday.

A 14-year-old Dublin schoolboy has appeared in court charged with rape.

The boy, who cannot be named for legal reasons, appeared at the Dublin Children’s Court on Wednesday charged with sexual abuse offences, which allegedly occurred when he was aged 12 and 13 years.

The teen, who was accompanied to court by his parents and his solicitor, was granted bail pending the preparation of a book of evidence.

He was charged that between June 2018 and March last year he intentionally caused a child to look at images of himself or people engaged in sexual activity. This is contrary to section six of the Criminal Law (Sex Offences)Act.

He also faced six counts of rape of a girl at his home and two other locations, one in Dublin and another outside the capital, on various dates between June 2018 and March 2019.

Garda Sarah Fitzgerald told Judge Treasa Kelly that the boy “made no reply after charge” on Wednesday.

After evidence of his arrest was given, a State solicitor asked for an adjournment to prepare a book of evidence.

“The Director [of Public Prosecutions] directed this matter will be dealt with on indictment”, the court heard. This means the boy will face trial at the Central Criminal Court.

Due to the nature of the serious allegations, the Children’s Court, does not have discretion to consider retaining jurisdiction to hear the case.

There was no objection to bail subject to a condition stipulating that the boy could not have any contact with the complainant or prosecution witnesses.

The teen has not indicated how he will plead and spoke just once during the hearing, quietly saying “yes” when asked if he understood.

Legal aid was granted after defence solicitor Lorraine Stephens told the court the boy was a student. She said it was hoped the book of evidence will be ready when the case resumes in April.