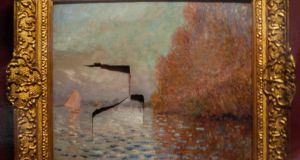 The damaged Claude Monet painting entitled Argenteuil Basin with a Single Sail Boat (1874) at the National Gallery of Ireland on Clare Street, Dublin.

A man has gone on trial accused of damaging a €10 million Monet painting in the National Gallery four years ago and damaging two paintings in the Shelbourne Hotel two years later.

Andrew Shannon (50) of Willians Way, Ongar, Dublin 15 has pleaded not guilty at Dublin Circuit Criminal Court to damaging a Claude Monet painting entitled Argenteuil Basin with a Single Sail Boat (1874) at the National Gallery of Ireland on Clare Street on June 26th, 2012.

He further pleaded not guilty to damaging two Felim Egan paintings – Morning Strand and Evening Strand at the Shelbourne Hotel on January 8th, 2014.

Opening the trial, Kerida Naidoo, BL, prosecuting, told the jury that both incidents involved damage to three paintings and that the incidents are very unusual events.

“These paintings were deliberately vandalised. It was an act of almost mindless vandalism,” said Mr Naidoo.

He said vandalism to paintings is “extremely rare” and that both incidents are linked through the nature of events.

Mr Naidoo said: “It is not a coincidence you can ignore, it’s a fact that that the defendant was present when the three paintings were damaged.”

“It shows his state of mind about paintings, that he has some kind of issue, urge or impulse to damage paintings.”

Counsel said another element is the fact that Shannon was on bail when he committed the second offences and that a term of his bail conditions was not to go anywhere near the National Gallery or another gallery.

“And he finds himself innocently and accidently in the room where the paintings are,’ said Mr Naidoo. “We say this is why he went to the Shelbourne Hotel.”

Garda Michael Moore told counsel he retrieved the CCTV footage from the art gallery and identified Shannon to the jury, describing him as “wearing a blue top, a dark jacket and carrying a plastic bag,” walking through the art gallery.

“He went into room 13 and came back out at 10.59am,” Garda Moore told the jury. He said Room 10 was where the Monet painting was hung.

“The defendant is seen entering the right hand side of the footage into the room. He then leaves the room and comes back in at 11.01am,’ said Garda Moore.

“He is seen falling forward towards the painting and the two people near him are the couple from New Zealand, ” Garda Moore told the jury.

Mr Seán Rainbird, Director of National Gallery of Ireland, gave evidence that if the Monet painting went on the market today, it might be sold for €10 million.

He also said the gallery would see holding the painting as “priceless.”

“It is beyond that of currency as it has a high cultural value and a high value to the exhibition. It is priceless,” said Mr Rainbird.

The trial, which is expected to last two weeks, continues before Judge Martin Nolan and a jury of seven men and five men.