Woman alleged to have bombarded radio DJ with threats and abuse 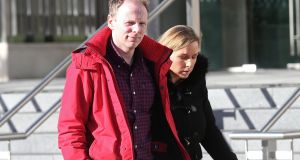 Jeremy Dixon and his wife Sue leaving the Dublin District Court where they both gave evidence. Photograph: Collins 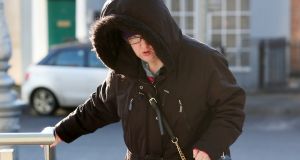 Geraldine Delahunty (41) of Ballyfermot, Dublin, leaving the Dublin District Court today where she appeared on charges of the Non Fatal Offences Against the Person Act for alleged harrassment of radio DJ Jeremy Dixon. Photograph: Collins

An alleged Twitter troll used a series of fake accounts to bombard a Dublin radio presenter with threats and online abuse, a court has heard.

Geraldine Delahunty (41) with an address at Convent Lawns, Kylemore Road, Ballyfermot, Dublin is alleged to have become infatuated with 98FM’s Jeremy Dixon.

She appeared before Judge Michael Walsh at Dublin District Court on Thursday to face a single count contrary to section 10 of the Non Fatal Offences Against the Person Act, for alleged harassment of Dublin Talks co-host Jeremy Dixon from August 4th, 2014, until January 16th, 2015.

Judge Walsh held that the case was too serious to be dealt with in the district court meaning Delahunty will face trial in the circuit court.

In an outline of the allegations for the purpose of deciding jurisdiction, Garda Sergeant Gail Smith told Judge Walsh it was alleged Mr Dixon was harassed via Twitter. It started with comments, some of which were “quite upsetting”, including one message that he would be killed.

It was alleged that a number of false statements were made, such as untrue claims that the broadcaster abused his wife and took drugs. The tweets could be seen by Dixon’s 15,000 Twitter followers.

It was also alleged that his home address was posted online and references made about his wife. Garda Sgt Smith said the broadcaster tried to block the poster and to prevent these tweets. However, it is alleged, “the defendant created account, after account, after account, some in the injured party’s name and his wife’s name”.

It’s alleged she posted pictures of the radio presenter and his wife. Mr Dixon said the tweets were relentless. It affected his work because a company he did business with had been contacted to untruthfully tell them not to employ him because he takes drugs. His wife was also afraid and had also received an untrue message saying he was having an affair with a work colleague.

He said it placed a great strain on their lives and his wife Sue told the court it had made her nervous and that when she was at home alone she had to keep all the doors locked.

Defence solicitor Michael Kelleher said it was disclosed to gardaí that his client was initially a fan, but became quite infatuated over a period of years.

The DPP held the case could be dealt with at district court level only if a plea of guilty were entered. However, having heard an outline of the allegations, Judge Michael Walsh held it was not a minor offence and should be sent forward for trial to the higher court.

The woman was remanded on continuing bail to appear again in March when it is expected she will be served with a book of evidence and returned for trial.

Jeremy Dixon (40) presents “Dublin Talks” from 10am to 12 mid-day each weekday with Adrian Kennedy on 98FM, with nightly repeats at 10pm. They joined the station earlier this year after leaving FM104’s Phone Show, which they had presented together for 16 years. Dixon is also well known for his DJ work at nightclubs.

The Boris bridge: Will Johnson’s ‘vanity project’ ever happen? 16:08
Flooded Co Clare village evacuated as rainfall warning issued for most counties 15:07
‘The IRA has gone and they are not coming back. That’s the reality’ 15:06
Sinn Féin to hold public meetings around country to rally support for government efforts 10:59
Gardaí wish to speak to taxi driver after girl dies in Cork car crash 10:08

1 Flooded Co Clare village evacuated as rainfall warning issued for most counties
2 Coronavirus: Global concern grows with sharp rise in infections outside China
3 The Boris bridge: Will Johnson’s ‘vanity project’ ever happen?
4 Portraying Sinn Féin as a dangerous party is a political strategy
5 ‘The IRA has gone and they are not coming back. That’s the reality’
Real news has value SUBSCRIBE