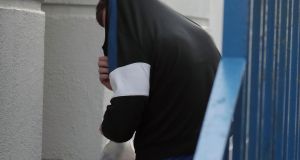 A man (25) has been refused bail after he was charged with robbery in connection with a fatal collision in Co Dublin last week.

Jacqueline McGovern (54) was one of two women struck by a car as she walked on a footpath on Avondale Road in Killiney on the night of March 10th last, minutes after an alleged shop raid in the locality.

Mother-of-three Ms McGovern, a special needs assistant was from the area and worked at Our Lady of Good Counsel Girls National School in Johnstown. Ms McGovern died while the second woman’s injuries were not life-threatening.

Two men were charged and held in custody for a week after they appeared at separate courts on Thursday charged with robbery in connection with the incident.

The first man, Edward Andrews was refused bail, but the second accused, Terry Meegan, made no application and consented to a remand in custody.

Father-of-one, Edward Andrews, of Belarmine Hall, Stepaside, Co Dublin, was was charged with robbery of a Centra on Barnhill Road in Dalkey of €806 on March 10th.

Mr Andrews appeared before Judge Grainne Malone at Dun Laoghaire District Court on Thursday morning. Evidence of arrest and charge was furnished by certificate to the court by Detective Garda Robert Clifford who objected to bail due to the seriousness of the case. He also told Judge Malone: “There is a possibility of further serious charges arising out of this incident.”

Defence solicitor Ronnie Lynam confirmed his client is pleading not guilty and pleaded for bail to be granted.

In his objection, Detective Garda Clifford said the incident at Centra Barnhill Stores took place at 9.20pm on March 10th. He alleged two masked raiders entered the store and threatened staff, including a 79-year-old man. Staff were traumatised, he said.

He said three tills were opened and just over €800 in cash was allegedly taken. It was alleged the raiders fled to a waiting car. A couple of minutes later a collision occurred and two women were knocked down, one was injured but the second died, Detective Garda Clifford said.

Pleading for bail, defence solicitor Ronnie Lynam said his client worked part-time as a labourer but was also on social welfare. He had a child and a partner, and he has lived with his parents at for the past 10 years.

Mr Lynam submitted that this was a case where it was appropriate to admit him to bail. He said the evidence “is seriously challenged by the accused and he maintains his right to do so, and he is pleading not guilty to this matter”.

Judge Malone refused bail and remanded him in custody to appear at Cloverhill District Court on March 26th next. Mr Andrews, was granted legal aid .

A second man arrested in the investigation appeared before a late sitting of Dublin District Court also charged with robbery of the Centra shop.

Detective Garda Deirdre Finn told Judge Miriam Walsh that Terry Meegan(27) of Ridge Hall, in Ballybrack, Co Dublin was charged at 3.10pm at Dun Laoghaire station. She told Judge Walsh that Mr Meegan, “made a reply of no comment after caution”.

Defence solicitor Andrew Vallely said a bail application was not being made at this stage and there was consent to his client being remanded in custody to appear at Cloverhill District Court on March 23rd next, via video-link.Legal aid was granted after the court heard Mr Meegan was unemployed.

1 Coronavirus: Public health experts considered moving Dublin to Level 4
2 The far right rises: Its growth as a political force in Ireland
3 Blanchardstown-Mulhuddart has worst Covid-19 rate in country
4 President Higgins says British must face up to their history of reprisals
5 Why are some in Fianna Fáil unhappy with Micheál Martin?
Real news has value SUBSCRIBE