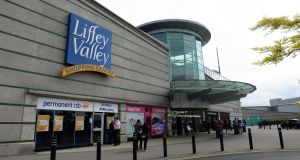 Two men have been charged with money laundering in connection with a Garda seizure of almost €200,000 in Dublin.

Paul Carew (40), with an address at Saggart Court Lodge, Saggart, Co Dublin; and Edward McCarthy (31), from Reuben Street, Rialto, Dublin, were charged with possessing proceeds of criminal conduct of €191,160 under section 7 of the Criminal Justice (Money Laundering and Terrorist Financing) Act 2010.

The charges relate to the seizure of money by officers from the Garda National Drugs and Organised Crime Bureau at the yellow car park at Liffey Valley Shopping Centre on August 27th, 2016.

They appeared before Judge Colin Daly at Dublin District Court on Thursday.

Det Redmond O’Leary told Judge Daly that Mr Carew made no reply when he was charged on Thursday morning.

His solicitor, Anarine McAllister, told the court he was not making a bail application.

Mr Carew was granted legal aid after the judge was told he was not working and he was remanded in custody to appear via video-link at Cloverhill District Court next Wednesday.

Mr McCarthy also made no reply when charged on Thursday, Det O’Leary said. He was remanded in custody to appear again next week at Cloverhill District Court.

Det O’Leary said the Director of Public Prosecutions has directed that they are to face “trial on indictment”. This means the case will be heard in a higher court.

A book of evidence has yet to be completed.

1 Covid-19: Six further deaths as reproduction rate ‘at or above one’
2 Mother and five children sleeping in car while seeking accommodation
3 Covid wage subsidy recipients cannot draw down funds from State mortgage scheme
4 ‘Prepare for January’: European Commission warns as Brexit trade talks stall
5 Donald Trump is an amateur populist – the real trouble is yet to come
Real news has value SUBSCRIBE