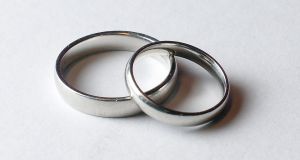 Genuine romance may have blossomed between a Romanian man and a Pakistani woman charged by gardaí as part of an investigation into sham marriages, a court has heard. File photograph: Anthony Devlin/PA Wire

Genuine romance may have blossomed between a Romanian man and a Pakistani woman charged by gardaí as part of an investigation into sham marriages, a court has heard.

Ioan Arminia and Nadia Mir, who live in Bracklaghboy, Ballyhaunis, Co Mayo, are now in a relationship, Judge Mary Devins was told at Castlebar District Court.

The pair, who are both in their 30s, were arrested and charged as part of Operation Vantage, which was set up last year by the Garda National Immigration Bureau (GNIB) to investigate illegal immigration and identify marriages of convenience.

Mir pleaded guilty to the same offence and also with providing false and misleading information to an officer of the Refugee Applications Commissioner on September 22nd, 2015.

At a District Court sitting in April, Det Garda Breandán Ó Suilleabháin of the GNIB told the judge he believed Arminia had been targeted by a gang who organises sham marriages because he was “vulnerable”.

The garda told the court that when interviewed, Arminia accepted that at the time the pair had planned to take part in a marriage of convenience, but “now he loves her”.

When the case came before the court on Wednesday, Arminia, speaking through an interpreter, told the court his co-accused was now his girlfriend.

Mir told the court she is living at the same address as Arminia, is in a relationship with him and they intended to marry each other.

She explained she had been refused asylum here but had lodged an appeal against that decision.

Convicting Arminia, the judge imposed a fine of €150.

She put the case against Mir back until September 21st so that it can be determined whether she is eligible for community service as an asylum-seeker.