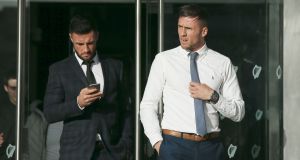 Two Scottish league footballers have appeared in court accused of an assault in Dublin city-centre.

The teammates were accused of assault causing harm to a named male at Ely Place, in Dublin 2, obstructing a Garda, and engaging in threatening and abusive behaviour at the same location on December 8th.

Mr Callaghan, of Lime Park Crescent, Kelty, Fife, in Scotland and Mr Johnston, of Moss Green Street, also in Kelty, each had bail set at €2,000. They both had to lodge €1,000.

They faced their second hearing when they appeared before Judge John Hughes at Dublin District Court on Friday.

Neither man has entered a plea yet. It has not been decided if the case will stay in the District Court or get transferred to the Circuit Court, which has tougher sentencing powers.

The charges are contrary to section three Non Fatal Offences Against the Person Act and the Public Order Act. The two men were ordered to return to court in March for the DPP’s directions to be given.

Evidence of arrest charge and caution had been given when they were first brought before the court on Monday, and had the bail terms set.