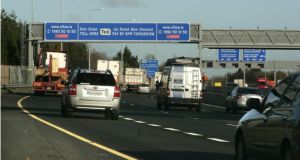 The judge ordered Jessica Brewer to pay €500 to the motorway operator and a further €100 toward prosecution costs. File photograph showing the M50: Dara Mac Dónaill

Six motorists have received fines totalling €56,000 at Dublin District Court after failing to turn up to face charges for repeatedly failing to pay M50 tolls.

Some 22 motorists had been summonsed to appear in court on Monday; prosecutions against seven of them went ahead.

Six motorists failed to show up but were given fines ranging between €5,000 and €15,000 in their absence and were also ordered to pay a further €350 in prosecution costs.

School secretary Jessica Brewer, from Latchford Close, Clonee, Dublin 15, had the highest number of unpaid tolls of the defendants listed on Monday, 520 over a three-year period.

She cried in court as she told Judge Anthony Halpin it happened because she was unwell last year and she feared a recorded conviction could jeopardise her career plans.

After listening to her story, Judge Halpin remarked, “You can’t get feathers off a frog’s back”, saying she did not have the money.

He ordered her to pay €500 to the motorway operator and a further €100 toward prosecution costs, adjourning the case until a date in July when the case will be struck out with no record if she has paid by then.

The court heard she had paid for 39 trips each costing €3.10 on the motorway but another 520 remained unpaid. She admitted she had been the driver and was responsible. She has since set up a toll tag and is now paying when she uses the motorway.

Ownership of her car was recently transferred, the court heard.

Meanwhile, a goods vehicle owner, with a history of 250 passages and six payments, received €7,000 in fines.

Another commercial vehicle owner was fined €15,000 for 138 passages but the court noted he not paid any of his tolls despite being issued with 414 warning letters.

Prosecuting counsel Thomas Rice BL, instructed by Pierse Fitzgibbon Solicitors, said a Transport Infrastructure Ireland official had certificates of ownership as well as the images of the vehicles passing the toll gantry on the M50, on dates in June, July and August last year.

Fines of up to €5,000 per charge as well as a sentence of up to six months can be imposed.

The court has heard the motorway authority only selected habitual non-payers to face criminal proceedings but no one has been jailed so far.

Nine cases were adjourned on Monday for defendants to reach agreement over the unpaid charges. Another two were struck out after debts were resolved. Four prosecutions were withdrawn due to issues with summonses.

The standard M50 toll for an unregistered private car is €3.10 must be paid before 8pm the following day or else there is a €3.00 penalty for missing the deadline. Motorists have 14 days from the date of issue to pay for the journey and the initial penalty; otherwise a further penalty of €41 is applied. After a further 56 days there is an additional penalty charge of €103 and if it remains unpaid legal proceedings follow with the possibility of a court fine of up to €5,000 as well as a jail term of six-months, or both, per offence.

Commercial and goods vehicle owners have to pay higher tolls.

The registered owner of a vehicle is responsible even if they were not driving the vehicle.