Council said it was prosecuting the religious sister with ‘great reluctance’ 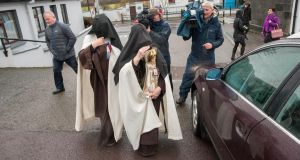 A Carmelite nun of the Holy Face of Jesus has been found guilty of a breach of the planning laws after she constructed an unauthorised compound for her and a newly ordained sister to live in at Leap in west Cork.

Sr Irene Gibson, who has been a consecrated hermit for 30 years, arrived at Skibbereen District Court in Co Cork on Tuesday with Sr Anne Marie from New Zealand, who was ordained last May.

Before the trial got under way Judge James McNulty asked the pair to remove a statue of the Child of Prague from the court, saying that while he was respectful of all faiths and the right to venerate, “this is not the place for holy statues”.

The nuns had carried the statue, traditionally used as a solicitation for good weather, into the court amid torrential rain.

Cork County Council had brought proceedings before the court alleging a breach of Section 154 of the Planning and Development Act. Solicitor for the local authority, Patricia Murphy, said there had been a failure to comply with an enforcement notice.

Judge James McNulty was told the local authority had received complaints from the public in 2016 about the erection of a two-storey cladded building near Leap.

The structure comprised of a wooden chapel, a wooden shed and a timber fence as well as seven pods, or garden sheds. The development was without planning permission, and an enforcement order was served.

Ms Murphy said the local authority proceeded to a prosecution in the case with “great reluctance”, having explored every avenue open with the defendant.

She said to their credit the nuns had removed the chapel-type building, the meeting room and three pods from the site. An illegal entrance had also been closed off. However, four pods remained on site, in addition to unauthorised signage and a storage container.

Executive planner at the council Philip O’Sullivan said he had visited the site the day before the court sitting. On a positive note, the modular building which the residents had been “apoplectic” about had been removed. However, he claimed he was met at the property by a “verbally abusive nun” whose name was not the same as the two sisters present in court.

Mr O’Sullivan said the pods which were being used by the nuns to sleep in were not fit for habitation. “Sometimes people have to be saved from themselves,” he said.

Sr Irene (61) declined to have legal representation in court, while Sr Anne Marie (21) – who did not give her surname in court but instead wrote it on a piece of paper for the judge – acted as a witness. She said that in 2016 the defendant bought the property with the dream of developing part of this area for amenity and recreational purposes.

“They have no electricity, no running water, no flush toilets, no showers and no phone. It would either take a great imagination or an unreasonable ill-will for anyone to consider these sheds as anything but temporary accommodation.”

She accused the council of causing them “extra stress, hardship, bad publicity and great financial loss by treating us in a a cold-hearted and bureaucratic way”. She further described the council as “vindictive and petty tyrants”.

Sr Irene said the original modular building was “ugly”, and she apologised to locals for having had it built. She said she posted numerous advertisements on DoneDeal in a bid to sell it, and had eventually found a purchaser. She sustained a considerable loss in the transaction.

If the court ruling went against them they would be “virtually homeless”, she added.

While she admitted receiving several warning letters, she said she lived a “busy life” of prayer and did not have much time to study “county council law”.

The court heard the nuns had an offer of accommodation in Youghal, Co Cork and hoped to be able to move in by Christmas.

Judge McNulty said there was no suggestion that the local authority had acted in any way improperly in the case. He convicted Sr Irene, deferring sentencing until April 28th next to give the nuns the possibility of sorting out their new accommodation.

He said he was a great believer in God being a good provider, but that “he may need to hurry up. You may need to pray harder, Sister.”

The nuns declined to speak to the media leaving court and covered their heads as they entered a waiting car.