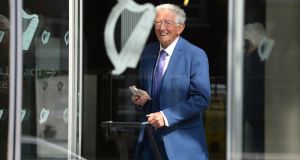 Veteran comedian Sil Fox has walked free from court after he was cleared of sexually assaulting a woman in a bar in Dublin.

Sylvester “Sil” Fox (87), pleaded not guilty to the sexual assault on December 17th, 2018 after he agreed to have a selfie photo taken with the woman.

The charge was dismissed on Wednesday by Judge Paula Murphy because of inconsistencies between the complainant’s evidence and CCTV footage shown during the non-jury trial at Dublin District Court.

After the decision was delivered, Mr Fox, who was brought to court by his son Cyril, told reporters he has been through “months of hell”.

“My health, physically and mentally, has deteriorated and I have endured countless nights with little or no sleep,” he said.

All his shows were cancelled because of the case but he is now looking forward to getting back to work, the entertainer said.

The veteran comedian, who grew up in the Liberties but has an address at Wellington Lawn, Templeogue, Dublin 6, gave a statement to reporters on the steps of the court after the ruling was given.

“I am delighted that I have been completely exonerated of all charges by the court today. This case should never have been taken. Nothing untoward or inappropriate ever happened. As the CCTV footage make crystal clear I was asked to participate in the selfie photo, which I did, and I walked away five seconds later. And I strongly believe the DPP has some serious questions to answer as to why they took this case.”

The State had concluded calling prosecution evidence in February. The case was also delayed as a result of the Covid-19 crisis.

The defence did not call any witnesses.

Counsel Emer Ní Chuagain, for Mr Fox, lodged a written preliminary application for a dismissal to be considered.

Ms Ní Chuagain argued there was no case to answer, citing legal principles in relation to tests which apply when there are inconsistencies in evidence.

Judge Paula Murphy had re-watched the CCTV evidence before delivering her ruling on Wednesday.

She said the court was impressed with the complainant.

However, dismissing the case, Judge Murphy said having given careful consideration her evidence and the objective CCTV evidence, and the law, a jury properly directed could not convict on the evidence before the court.

She said it was common case that they were in the bar. Patrons were enjoying themselves and Mr Fox was beckoned over to the woman’s table by her.

He participated in taking a selfie photo at her request.

A conflict of evidence in the evidence of the complainant and the CCTV shown to the court was a significant issue, Judge Murphy held.

The woman made a specific allegations that Mr Fox had put his left hand on her groin and tickled her vagina for 30 seconds as the photo was taken.

In court she had denied telling the investigating garda that it took a second or split seconds which was noted in her statement of complaint.

She smiled in the photo, the judge noted.

The CCTV evidence was shown to her and she still maintained he had sexually assaulted her. She had accepted the footage showed his hand on the table the entire time it took for the photo to be taken.

The only time his hand was not visible was for three seconds after the photo was taken, not 30 seconds.

The complainant was unable to explain this inconsistency and redacted her evidence that his cuff may have been on the edge of the table.

Judge Murphy said the court has had a benefit of reasonably good quality CCTV footage. It also showed Mr Fox leaving at a leisurely place, not skulking away, as the complainant had described.

The woman showed no emotion as the case was dismissed.

After the case, Sil Fox told RTÉ’s Liveline programme, “It’s like the weight of the world has been lifted off my shoulders.

“I just cannot believe it, of course I knew I hadn’t done anything wrong. That’s what kept me going all the time.”

He said that he had not worked a day since last July, “the charity shows, the fund raisers, all the things we used to do, I missed them.

“Sometimes I used to cry when I’d realise that nobody wanted to know anything about me. They all believed I was guilty. But a lot of people believed in me.”

Mr Fox said he suffered sleepless nights. “I found out that I wasn’t not as talkative as I would be, when I’d see people out I always thought that they didn’t want to talk to me although most of them did, but I always got the feeling that I was a criminal which I wasn’t. I felt very sad over the whole thing.