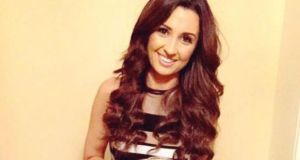 Nadine Lott, a beauty therapist and mother of one, died on December 17th at St Vincent’s Hospital in Dublin, three days after sustaining serious injuries in her home in Arklow, Co Wicklow. Photograph: Facebook.

A man has been sent forward for trial accused of murdering his former partner last year.

Nadine Lott, a beauty therapist and mother of one, died on December 17th at St Vincent’s Hospital in Dublin, three days after sustaining serious injuries in her home at St Mary’s Court, Arklow, Co Wicklow.

Mr Murtagh, of Melrose Grove, Clondalkin, Dublin appeared at Bray District Court accused of a serious assault on Ms Lott on December 16th. The court heard he said “sorry” when that charge was put to him.

A book of evidence was served on the accused at Cloverhill District Court on Wednesday and Mr Murtagh was told by Judge David McHugh that he was being returned for trial to the Central Criminal Court.

The judge told him he must notify the prosecution within 14 days if he intends to use an alibi in his defence.

Judge McHugh acceded to a request from defence solicitor Padraig O’Donovan to grant legal aid to include senior counsel representation. He also agreed to the solicitor’s request for continued psychiatric assessments of the accused.