Man charged with serious assault of a woman in Arklow 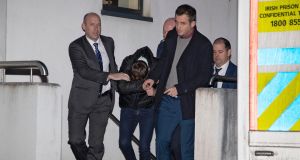 A man has been charged in court with the serious assault of a woman in Arklow, Co Wicklow .

The alleged assault on Nadine Lott, a woman in her early 30s, was in the early hours of Saturday morning.

Detective Garda Hall told the court that Mr Murtagh said “sorry” in response to the charge of assault causing harm. He wore a jumper and jeans at Monday’s hearing.