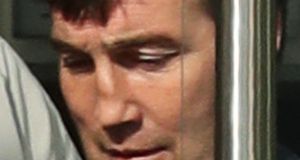 A 44-year-old Dublin man has appeared in court charged over a botched armed raid at his local takeaway in which two staff members were shot on New Year’s Day.

Joseph Behan, with an address at Edenmore Park, Raheny, was arrested on Sunday following directions from the Director of Public Prosecutions (DPP).

He was charged with two counts under the Firearms Act for unlawful possession of a gun and ammunition as well two other related offences, attempted robbery and reckless discharge of a firearm.

Detective Sergeant Eoin Colbert told Judge David McHugh at Dublin District Court on Wednesday that Mr Behan replied, “I want to know what type of gun it was meant to be” to one charge.

He had no response to the other three charges.

The defendant, who is unemployed, was granted legal aid.

Ionut Dateu (38) and cook Vasile Bitica (28) were both shot in the chest while they worked in Mizzoni’s Pizza at Edenmore Shopping Centre, Raheny, Dublin 5, in the early hours of January 1st, 2019. Both were hospitalised with chest and stomach wounds.

Judge McHugh noted a garda objection to bail but held that despite the alleged offences being serious there were not grounds to refuse bail.

Mr Behan was ordered to abide by a number of strict conditions and told he had to return to court on May 8th next to be served with a book of evidence.

Detective Sergeant Colbert had objected to bail citing the seriousness of the case. He told Judge McHugh it was alleged a person on a bicycle approached the takeaway at 00.19am on January 1 last.

It was alleged the raider had his face covered and wore gloves, and threw a carrier bag across the counter and demanded staff fill it, the court was told.

Judge McHugh was told staff members threw a number of objects at the raider who fired two shots hitting one staff member in the chest and the other in the abdomen.

It was alleged the raider fled on a bicycle.

Detective Sergeant Colbert agreed with defence solicitor Eoin Lysaght that the defendant had the presumption of innocence. He also said gardaí knew where Mr Behan lived, however, he raised concerns that there was “still a firearm outstanding” and added that it was a serious matter under investigation.

Mr Lysaght put it to him that it was the same in January when the defendant was detained by gardaí but was then released pending the preparation of a file for the DPP.

The solicitor asked why this issue had become important in a bail application. “The DPP directed charges,” Detective Sergeant Colbert replied.

The DPP has directed Mr Behan is to face trial on indictment.

Granting bail, Judge McHugh said it would be in his own bond of €100 and subject to strict terms.

Mr Behan was ordered to sign on daily at Coolock Garda station, provide gardaí with a contact phone number, obey a midnight to 7am curfew, stay away from Mizzoni’s takeaway and have no contact with witnesses. The judge also ordered him to surrender his passport.

The defendant addressed the court once during his hearing to tell the judge he had lost his passport but would hand it over to gardaí once it was found.

His solicitor said Mr Behan would also undertake not to apply for a new one.