Man (20) accused of trying to kidnap woman in Dublin said it was ‘a joke’, court told 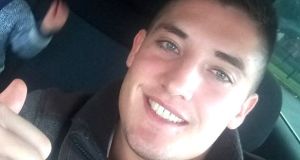 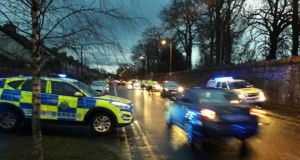 The incident occurred at about 7.30am as the woman was out for a morning walk

A 20-year-old man accused of attempting to kidnap an elderly woman in Dublin on Monday said it was “a joke that went wrong” after being charged, a court has heard.

Martin Gallagher appeared in Dublin District Court charged with the attempted abduction and assault causing harm of the 69-year-old woman beside the Phoenix Park.

Mr Gallagher of Rusheeney Avenue, Hartstown, Dublin 15 is accused of false imprisonment of the woman at Martin’s Grove on Blackhorse Avenue on January 6th, 2020. He is also accused of assaulting the woman, causing her harm, during the alleged incident.

The incident occurred at about 7.30am as the woman was out for a morning walk. Gardaí said a man approached the woman and attempted to force her into the back of a car. The woman managed to flee and gardaí launched a large investigation involving checkpoints, door-to-door inquiries and multiple public appeals for information.

Mr Gallagher was arrested in the Blanchardstown area the following day. He was released on Wednesday morning following questioning by gardaí but rearrested that evening in relation to the alleged attempted kidnapping.

The accused appeared at Dublin District Court in the Criminal Courts of Justice wearing a grey sweater and navy trousers. He blew a kiss to supporters in the public area shortly after entering court.

Detective Garda Paul Kirwan told Judge Brian Smyth he charged Mr Gallagher with the offences in the early hours of Thursday morning. He said the accused made no reply when charged. However defence solicitor Michael Kelleher said his client maintains he did make a reply which was not recorded by gardaí.

He said Mr Gallagher replied. “I’m sorry, it was a joke that went wrong”. Mr Gallagher was “anxious” to make that reply, the solicitor said. Det Garda Kirwin applied for Mr Gallagher to be remanded in custody.

There was no application for bail and Judge Smyth agreed to remand the accused in custody until a hearing in Cloverhill District Court on January 16th next.

The judge also agreed to grant legal aid after viewing a statement of means for Mr Gallagher.