‘If there was a hole I could have jumped into and gone to sleep and never woke up . . . I would have taken that option’ 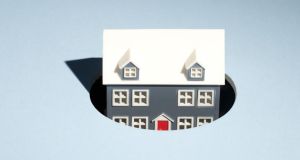 “If there was a hole that I could have jumped into and covered it over and gone to sleep and never woke up, both my wife and I would have taken that option.”

The words of a Co Clare husband and father, describing the strain spiralling mortgage debt has had on his family’s life.

The man was speaking outside a packed basement Court No 3 at Ennis courthouse where he had just received an adjournment in his case.

In the case, Pepper Finance Corporation (Ireland) Ltd are pursuing the couple for a debt of €153,500 from the mortgage on their home, that includes arrears of €85,741.

The man said he and his wife haven’t taken the option of going into the ground because “we have family and that is the only reason. Otherwise, neither of us would be alive dealing with this, that is how bad it is.

“My glass is always half full. That has been my view all of my life. We were brought up in an exceptionally good family, but even I don’t see light at the end of the tunnel. We have only got a stay of execution today.”

The man admitted that he and his wife didn’t open a letter from their bank for a year or two “just out of fear”.

The man said the situation has totally affected his children who are currently in college. He said that having his medical card withdrawn in spite of suffering from a lifelong medical condition has not helped. “I’m hoping every Friday that my numbers come up because that is what this needs.”

Solicitor for the two in court, Caoimhe Collins, told the court that they are proposing to pay €700 per month towards the mortgage.

“They have restructured a credit union loan and they will have less bills after their children have completed college,” she said.

Ms Collins said that the father went through a period of bad health and wasn’t in a position to pay his debts.

However, the solicitor for Pepper said that “the mortgage is entirely unsustainable with those arrears”.

He said that the proposal is just over half of what the monthly mortgage repayments are. “€700 is not sustainable.”

County Registrar, Patrick Wallace, adjourned the case to May 15th.