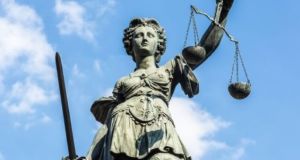 A father and son have been refused bail after they were accused of spitting on two gardaí on duty in Dublin city centre.

Dublin District Court heard concerns the incident on Thursday was at a time of heightened public health fears surrounding the spread of Covid-19.

Judge Miriam Walsh was told a crowd gathered around as a drug search got “out of hand” and the incident was filmed by passersby. It was posted on social media.

Paul Clarke snr (49) and his son James Clarke (27) of Clonard Road, Crumlin, Dublin, who are both on disability benefits, were charged with assaulting gardaí acting in the execution of their duty.

James Clarke had additional charges for obstructing the officers and a breach of the peace. The incident allegedly happened at O’Donovan Rossa Bridge, Dublin 8, on Thursday morning.

They were refused bail and remanded in custody to appear at Cloverhill District Court on March 31st next.

Garda Kate Mulligan and Garda Kevin Carthy told the court they were objecting to bail and they cited public fear surrounding Covid-19.

Garda Mulligan told Judge Walsh a crowd gathered around and recorded the incident which she has since seen on social media.

Efforts were being made to get the footage. She said Paul Clarke snr was accused of spitting on gardaí carrying out their duties.

Opposing bail she cited, “other factors in relation to this in light of Covid-19, there is already fear in the population”.

Defence counsel Sarah Connolly said her client had a kidney transplant three years ago and also suffered from ulcers and gallbladder problems.

Garda Kevin Carthy told the court a drug search was being carried out on a different male and things “got out of hand”. He said both accused started spitting at him and his colleague. “I was spat at, at least twice,” he said.

The barrister said Paul Clarke snr accepted tensions were heightened but he denied spitting on anyone.

Denying him bail, Judge Walsh said as result of current matters “everybody’s lives have totally changed” however the accused were innocent until proven guilty.

She noted the Prison Service could assist Mr Clarke snr in relation to his health difficulties.

Objecting to bail in the case of James Clarke, Garda Carthy said in light of Covid-19 it was a very serious offence while gardaí were trying to carry out duties.

They were taken to Kilmainham Garda station after they were arrested at about 11.25am on Thursday.

The court heard father and son made no reply when charged.