Drink-drivers have day in court in Victorian style 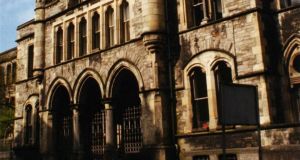 The judge had a list of more than 50 cases before him for the latest session of the District Criminal Court at Sligo Courthouse. Photograph: Wikimedia Commons

Judge Kevin Kilrane sat beneath a Gothic-style, wooden canopy in the Victorian courtroom in the centre of Sligo town on Thursday.

He had a list of more than 50 cases before him for the latest session of the District Criminal Court.

The room was filled with defendants whose families packed into the courtroom’s 19th century wooden pews.

Above them in a balcony space, Transition-year girls from the Ursuline College in Sligo had gathered to see justice in operation.

Among the cases was that of a young man who drove a van into a St Patrick’s Day parade in Sligo last year. He was charged with drink-driving, driving while disqualified and driving without insurance.

Oisín Kearney (23), of Kincon, Ballina, Co Mayo, had initially pleaded guilty to the charge, but withdrew his plea after a High Court ruling last September. The ruling, now under appeal, found alcohol breath-test results should be supplied in English and Irish.

He was also charged with driving while disqualified and without insurance.

Inspector Donal Sweeney told Judge Kilrane that on March 17th, 2015, the defendant drove a van on the wrong side of the road at Enniscrone and an oncoming vehicle had to take avoiding action.

On the same day, he drove “into the middle of a St Patrick’s Day parade”. He had previously been convicted of other traffic offences, including dangerous driving, and was disqualified from driving for 10 years in 2011.

Kearney’s solicitor, Mark Mullaney, acknowledged his client had “quite a number of run-ins”. He had also “spent quite a bit of time” in detention as a minor. Mr Mullaney said his client now worked full-time driving a mechanical digger.

“Off road I presume,” the judge interjected. The solicitor said yes.

In evidence, Kearney did not try to varnish the facts. He admitted he had been drinking in a friend’s house and, while his friend slept he took his van to go to the pub. Since then, his girlfriend had had a baby and he had settled down, he told the judge.

Judge Kilrane told Kearney he could have killed himself and left his unborn child without a father. He also said he was entitled to resile from his drink driving plea and he struck out that charge against him.

He sentenced him to five months in prison for having no insurance and five months for driving while disqualified. He suspended the sentences and disqualified him from driving for eight years. He said the sentence would be activated if he was found guilty of another road traffic offence or alcohol related offence within three years.

Frank Jinks, of Cloonlurg, Drumfin, Co Sligo, was disqualified from driving in April 2009 for 10 years, for having no insurance, and was again disqualified in 2009, this time for 15 years for drink-driving. His solicitor, Gerry McGovern, said his client turned to alcohol after his daughter died in a fire. His marriage ended, he spent time in jail and “dropped off the planet for a few years”. But he was now in a solid new relationship and hoped to get work at a new project in Drumfin, “driving dumpers”.

A contrite Jinks took the stand and admitted he was not proud of his record. But, he said, he had given up drinking, because he wanted to be with a lady from Pakistan who did not drink and did not like drink and “it was drink or her”. Asked if he would go back to the way he was, he said “never, never, never”.

Judge Kilrane described the man’s record as “appalling”, but said he seemed to have turned his life around and wanted to start afresh.

“I have some doubt about it, but I’m prepared to give you the benefit of the doubt,” he said.

“You’ve given me my life back, your honour,” Jinks said.

“Have the good sense to mind it,” the judge responded.