Kevin, Jackie Healy Rae and Malachy Scannell charged with series of assaults in 2017 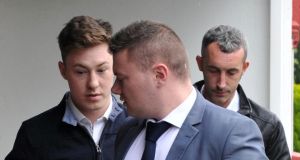 A son of Independent Kerry TD Michael Healy Rae told a man with whom he got into a dispute as he queued for chips late at night in Kenmare that the popular tourist destination was his town, a court heard today.

The allegation by complainant, Kieran James (30) came during the opening day of a trial where Kevin and Jackie Healy Rae, the sons of Michael Healy Rae, and a co-accused, Malachy Scannell, are charged with a series of assaults.

Mr James, who grew up in the UK but whose mother comes from Kilgarvan, told Kenmare District Court that he was assaulted by all three accused during a night out in Kenmare in the early hours of December 28th, 2017.

He said a dispute broke out when Kevin Healy Rae barged up and jumped the queue at a chip van in Kenmare town centre and in the course of an exchange, Kevin Healy Rae said to him “This is my town and this is my chip van.”

Kevin Healy-Rae (22) of Sandymount, Kilgarvan denied assaulting Kieran James causing him harm contrary to Section 3 of the Non-Fatal Offences against the Person Act at Main Street, Kenmare on December 28th 2017.

Mr Healy Rae’s brother, Jackie (23) of the same address, who was recently elected an independent councillor on Kerry County Council and works as his father’s parliamentary assistant, also denied a number of assault charges.

Defence barrister Brian McInerney BL said his clients would be contesting all charges. “There will be a full defence – they were acting in lawful self-defence in what they will say was an unprovoked attack upon them,” he said.

Mr James told how he had been out socialising in Kenmare with his then girlfriend and now wife, Lauren and four local cousins, Neilly O’Sullivan, Jane O’Sullivan, John Crowley and Kerri Crowley on the night in question.

He said that after Kevin Healy Rae barged to the top of the chip van queue, he (Healy Rae) started pacing up and down, muttering ‘Not tonight, not tonight” before returning with two other men whom he heard say “Where is he?”

Mr James said Kevin Healy Rae pushed him against the van so he pushed him back whereupon Jackie Healy Rae grabbed him in a head choke so tightly for about 30 seconds that he could not breathe.

His companions pleaded with Jackie Healy Rae to release him and when he did, they all walked quickly up Main Street but had gone 40 yards when they heard shouting and they saw the two Healy-Raes and Scannell.

Mr James said Jackie Healy Rae caught his right arm and pushed it up behind his back and they grabbed him by the jacket before punching him with this second assault lasting 30 seconds or so as he struggled to protect himself.

He said that he received six or seven punches to his face which resulted in his nose bleeding and he subsequently had to have two nose operations while also suffered a cut over his eye and a torn ligament in his shoulder.

Cross-examined by defence barrister Mr McInerney, Mr James said he had at most six pints on the night and while he was a bit tipsy, he denied he had been the aggressor and that he had triggered events by assaulting Kevin Healy Rae.

He rejected the suggestion that he had been staring at Kevin Healy Rae earlier in the Square Pint pub when he saw him “bouncing up the walls” and that he had stared at him and behaved in an intimidating fashion at the chip van.

Mr James’s wife, Lauren supported her husband’s version, telling the court her husband had said nothing to Kevin Healy Rae when he jumped the chip van queue and it was she who took issue with him barging to the top of the queue.

She said that during the second incident when the three men attacked her husband, she put her hands to them and shouted at them to stop hitting him while her husband’s cousin Jane O’Sullivan also did something similar.

“I saw the three boys attacking Kieran – his face was almost unrecognisable – his forehead was gashed and swollen – his nose was pushed to one side and I said to him ‘They’ve broken your nose’ ”, she told the court

Mr James’s cousin, Neilly O’Sullivan also alleged that the two Healy Raes had assaulted Mr James at the chip van and all three accused had assaulted him on Main Street and he also denied that Mr James was the aggressor.

Mr O’Sullivan also rejected a suggestion his own family were envious of the Healy Raes because of their success and because of political differences and they had triggered the incident “to bring the Healy Raes down a peg or two.”

Judge David Waters adjourned the case until September 25th for mention after hearing evidence from four prosecution witnesses and viewing some four minutes CCTV footage from Main St in Kenmare.