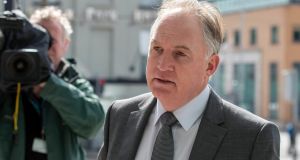 Brendan Grehan SC, the prosecuting barrister in the Ana Kriegel murder trial, said he did not support a full ban on reporting. Photograph: Collins Courts

The first week of the Ana Kriégel murder trial was marked by several clashes between the court and the media, culminating in an almost unprecedented, albeit brief, reporting ban on the entire trial.

The ban was reversed on the same day it was imposed but Mr Justice Paul McDermott ordered that it continue in the case of the Irish Daily Mail. He also summoned the Mail’s editor to court to face contempt proceedings based on its coverage.

On May 3rd, at the end of week one, Mr Justice Paul McDermott held up that day’s Mail front page bearing the headline “CCTV shows Ana being led to her death” between quotation marks.

It appeared above a report of the previous day’s hearing which dealt with CCTV footage showing Boy A, Boy B and Ana in the park in the hours before she was reported missing.

The visibly angry judge said “such headlines are calculated to incite public outrage against the accused” and such coverage was not appropriate in a criminal trial.

Mr Justice McDermott said he was very concerned with the headline and asked the prosecution and defence teams to consider the matter.

He noted there had already been several problems with media reporting of the case including Ana’s school being identified in some reports in other outlets.

The judge said because of this he was considering taking the “extreme step” of banning all reporting of the trial until after the verdicts.

Brendan Grehan SC, prosecuting, said the Director of Public Prosecutions (DPP) believed the headline did not accurately reflect the evidence heard by the jury. He said it appeared to conflate what was alleged with the evidence that was actually heard. It was up to the jury to decide if the evidence supported the allegations, he said.

Counsel said in his view the headline was “calculated to interfere with the course of justice”. He noted the Mail styled itself as “Ireland’s campaigning newspaper”.

He said the evidence in the case was already shocking and “there was no need for adornment”.

However, Mr Grehan said he did not support a full ban on reporting. He said the threshold for such a ban was very high.

If there was “deliberate flouting” of the rules across multiple outlets it would be justified, he said.

“The DPP does not think that point has been reached.”

He said the issue regarding the Mail was of an “entirely different order” from the earlier problems with media reporting.

Mr Colgan raised issues he had with reporting in other newspapers and said if it continued he would have to ask for the jury to be discharged. He complained about an Irish Independent report wrongly stating that a question asked by Mr Gageby during cross-examination was asked by him.

The judge said while there was a public interest to reporting murder trials, “especially a trial of this nature”, his primary consideration was the fair administration of justice.

The judge imposed a complete ban on reporting of the trial until a verdict. Journalists would be allowed remain in court and could take notes but nothing could be published or broadcast until the end of the case, he said.

That evening lawyers representing several media outlets objected to Mr Justice McDermott’s order on the basis that it went further than necessary.

Luán Ó Braonáin for RTÉ and The Irish Times submitted Article 34 of the Constitution required that justice be administered in public save in exceptional circumstances. Mr Grehan supported the media’s application.

Mr Grehan responded that “notwithstanding such a paternalistic approach” the court should take its guidance on any pressure felt by the accused from the defence counsel.

Mr Colgan, for Boy B, said his client lived in a small, tight-knit community and that the reporting was having an effect on him and his family. He said Boy B’s family were very relieved when the judge initially imposed the ban.

That evening, Mr Justice McDermott reversed his earlier judgment. He said such a sensitive trial required “very special” measures from the media and that his confidence in the reporting had been severely dented.

However, every media outlet except for the Mail would be allowed to continue to report the trial, he said.

As Mr Justice McDermott made his order, veteran journalist Nell McCafferty, who was in attendance that day, told him to raise his voice and use the microphone. “I’ll do my best,” the judge said.

The judge also made orders summonsing the Irish Daily Mail and its editor, Sebastian Hamilton, to court.

The following week counsel for the Irish Daily Mail Eoin McCullough SC said the headline had resulted from an editing error and that the “very experienced reporter” in court, Helen Bruce, was not at fault in any way.

A line in the body of the Mail story, which was also viewed as prejudicial by the court, was inserted by a member of the editorial staff, not the reporter, he said.

Mr McCullough apologised on behalf of the newspaper and asked for permission to continue reporting the trial.

This was denied by the judge who put the contempt matter back to July 4th for hearing. If the accusation of contempt is upheld, the newspaper will likely face a significant fine, although the judge has unlimited powers of punishment in the matter, including prison.