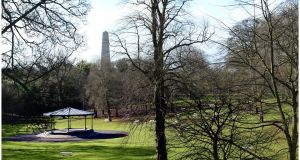 A man who made three “hoax calls” claiming there were bombs planted in the Phoenix Park has received a fully suspended sentence.

John Murphy (44) was homeless at the time when he claimed there were bombs at four locations in the park and threatened to “blow up all devices”.

He has 21 previous convictions, including convictions for drink driving and public order offences.

Detective Garda Alan Barry told Garret Baker BL, prosecuting, that on the night in question at around 10.50PM, Murphy made the first of three “hoax calls” in which gave his real name and his real mobile phone number.

Murphy said that there was a bomb in the Phoenix Park and gave no other details, the court heard. During a later call he threatened to “blow up all devices” in the park.

Murphy made a final phone call at about 11.30pm during which he gave details about the locations of the alleged devices. He said one was at “the big pillar”, at “the cross”, at “the chapel” and at St Mary’s Hospital.

Four gardaí were dispatched to investigate and they searched various areas in the park for approximately 40 minutes without finding anything.

When gardaí later arrived at his address to arrest him, Murphy invited them into his bedroom and placed a mobile phone on his bed. The detective rang the number that had made the hoax call and the phone began to ring.

Murphy then placed his head in his hands and said “Oh my God John, what have you done?” He described the calls as “sick” when recordings of them were played to him by gardaí­.

Det Gda Barry agreed with John Berry BL, defending, his client had been homeless for most of the last 11 years and has been in stable accommodation for the past seven months. He agreed that Murphy had been improving since then and was a man “deserving of a great deal of sympathy”.

Mr Berry said his client had been assigned a key worker when he was settled in accommodation by Fr Peter McVerry Trust, but that this key worker terminated the programme of assistance after two months because Murphy was doing so well, he did not need the resources.

Counsel said his client was awaiting surgery on his arm which had been delayed due to the Covid-19 situation.

Judge Pauline Codd said it seemed the offence occurred in the context of “a cry for help” by a man who was homeless at the time. She noted that Murphy has suffered with depression and epilepsy.

She sentenced him to one year imprisonment which she suspended in full on condition that he keep the peace and be of good behaviour for one year.