Man found not guilty of murdering trespasser with shears 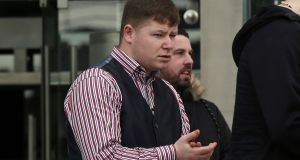 A Dublin man has been cleared of murdering a trespasser in his home by stabbing him with half a garden shears in the first murder case defended under the Defence and the Dwelling Act.

The Central Criminal Court heard that Mr Keenan and his wife had returned home that night to find two strangers in their bedroom.

The defendant claimed that the deceased had attacked him, and that he (the accused) had picked up the nearest object and hit him with it.

The jury heard that the law gave latitude to homeowners protecting their property.

It also heard that the accused was a member of the Travelling community, with his barrister stating that Travellers could be victims of burglaries and trespass too.

The verdict came just minutes after the judge assured the jury that the rest of the case would be conducted in semi-private, due to two jurors being approached by an individual asking how the trial was going.

The trial heard that Mr Mooney and his girlfriend, Ciara Tynan, had been staying in a caravan elsewhere on Dunsink Lane and had gone to Finglas to buy alcohol that day.

Ms Tynan testified that they were on their way back when a Traveller known to the deceased stopped his car and invited them to a mobile home in St Joseph’s Park for a drink.

She claimed that they had followed his directions to the empty and unlocked mobile home while this man went to an off licence.

She said they had gone into the bedroom because it was the only room with a light on, but she admitted she had handled items and opened cupboards in the living room on their way.

She said that the owner returned and told them to get ‘the f**k’ out and that they did so. However, she said that, as they were leaving, the accused stuck something into her boyfriend, who fell to the ground.

Wesley Mooney was unarmed and died where he fell on the decking of Mr Keenan’s mobile home. He had sustained two stab wounds, one below the left armpit with a depth of 27cm. It had gone through both lungs and sliced two of the main blood vessels: the pulmonary trunk and the aorta.

He had also suffered a spiral fracture to his shin. The pathologist suspected that this arose when he got his footwear stuck in the decking while trying to move.

The jury was shown the half of the long-handled garden shears that was used to inflict the two stab wounds. The accused had initially fled and disposed of the weapon, but later returned and told gardaí where to find it.

He told detectives that he had got a fright when he and his wife arrived home around 11.45pm to find the lights on and hear someone in their bedroom.

He said they went back outside and that a man and a woman walked out after them.

“They were two junkies and I was frightened,” he said, adding that the man had attacked him.

“He came running at me so I picked up some kind of a tool yoke and I hit him with it,” he said. “I hit him twice, high and low. He fell on the ground.”

The then 18-year-old later told gardaí he was involved in health and fitness and boxed in Cabra. He described himself as heavyweight.

The court heard that the deceased had a range of drugs in his system and had a scar down his face. His arm was not down by his side when he was stabbed.

Both he and Ciara Tynan had criminal convictions. His included convictions for a burglary, for threatening to kill, and for carrying an imitation firearm with criminal intent. Hers included a conviction for robbery.

The defence relied on a Court of Criminal Appeal judgement, as well as the Criminal Law (Defence and the Dwelling) Act 2011.

Séamus Clarke SC, defending, quoted Justice Adrian Hardiman in his closing speech. He had said in a Court of Criminal Appeal judgement that burglary was an act of aggression.

“Common knowledge will have told the homeowner that certain burglaries are committed by drug addicts, whose behaviour may be randomly vicious or wholly unpredictable,” it continued.

Mr Clarke noted that his client had described the man in his home as a “scary-looking junkie”.

He also said that the law specified that nothing shall require the homeowner to retreat from his or her dwelling. He said that an intruder had chosen to invade a person’s home and that there was latitude to the homeowner.

“Mr Keenan didn’t go home that night looking for trouble,” he said. “Trouble was waiting for him when he got home.”

However, Garnet Orange SC, prosecuting, said that the deceased was not attacking anybody and that this account had been contrived by the accused to justify what he’d done.

The prosecutor also said the force used had been unreasonable and said there was no need or justification for the use of the weapon. He said that the accused should have just allowed Mr Mooney to pass him by.

“This was something done in anger,” he said. “Martin Keenan was outraged because somebody had gone into his mobile home when he was not there.”

He also questioned Mr Keenan’s assertion that he had grabbed the nearest object with which to strike the deceased.

“Who, on earth, keeps something like that to hand?” he asked. “Nobody does. That is an obviously altered implement.”

Mr Justice Paul Butler told the 10 men and two women of the jury that there were three possible verdicts: guilty, not guilty or not guilty of murder but guilty of manslaughter.

He said that, under the 2011 Act, there was a right to use reasonable force, where a person believed the other entered the dwelling as a trespasser, especially in the context of committing a crime.

“That’s certainly a reasonable belief in this case,” he said.

“If you’re satisfied that the prosecution has not negated the accused’s case, that he felt in danger, a man was attacking him, then he’s entitled to defend himself using force,” he explained. “If the force is not disproportionate, then he’s not guilty.”

The jury foreman asked how the 2011 Act differed from the law that had been there beforehand.

“Before that, if you were in situation, you had to retreat,” replied the judge. “Now, you have certain rights in your home. If you’re using the force in defence of yourself or your home and it’s not reasonable then it’s manslaughter, not murder.”

There was standing room only in the courtroom once the trial reached the deliberations stage. There was also a large garda presence, particularly this morning, when it emerged that two members of the jury had been approached by an individual.

The judge took the unusual step of clearing the courtroom before the jury was brought in. The judge told the jurors to relax, that there were no members of the public present.

The foreman confirmed that a member of the public had approached two jurors and asked how the trial was going.

The judge said that both sides were happy to proceed if the jury was, and assured the jurors that they would proceed in semi private. The jurors agreed and they continued their deliberations for a number of minutes before signalling that they had a verdict.

The judge allowed the parents of both the accused and the deceased to return to court. They sat in silence as the foreman delivered a majority verdict of not guilty following four hours and 15 minutes of deliberations.

Mr Justice Paul Butler discharged the accused, who had been on bail throughout. He wept as he left court with his parents.

Wesley Mooney’s mother also broke down in tears, as she and his father were comforted by members of Victim Support.

Man (61) charged with murder of woman in Belfast 23:10
Getting gardaí to enforce quarantine in homes ‘problematic’ 23:05
Enda Kenny: Border poll is ‘meaningless’ without putting in work on living together 22:58
Employer ordered to compensate worker after rejecting remote working 22:49
Independent inquiry to examine North’s mother and baby homes 22:34