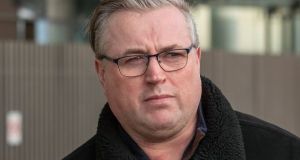 A witness told the trial last November that he heard Jonathan Dargan shouting ’bang, bang’ as he punched the men. Photograph: Collins Courts

The family of a man who died after a one punch assault by a nightclub doorman has told a court their lives were ripped apart by the fatal attack.

After a trial at Dublin Circuit Criminal Court last November Jonathan Dargan (49) was found guilty of killing Patrick Mullally (56) by knocking him to the ground with a single punch. Mr Mullally and another man Shane Cunningham had approached Dargan on the Harold’s Cross Road, Dublin at about 4am on March 6th, 2016 to intervene in a row he was having with his girlfriend.

The two men and others had been out celebrating Mr Mullally’s retirement from Guinness weeks earlier when they walked up to Dargan. Dublin Circuit Criminal Court heard that Dargan threw a number of powerful punches at the men.

Mr Mullally put his hands up to shield himself but at least one punch connected with him, shattering his jaw and cheekbone and knocking him to the ground. A witness told the trial last November that he heard Dargan shouting “bang, bang” as he punched the men.

This witness, a passing cyclist, also said that when he had earlier stopped at the rowing couple, Dargan had told him he to “f**k off and mind his own business” and that “he’d kill him or stamp on his head on the ground”.

Mr Mullally suffered a subdural haemorrhage and brain trauma due to a blunt trauma to the face and head and died the next day.

The defendant, a Tae kwon do instructor who has worked as a doorman at Lillie’s Bordello nightclub for two decades, admitted “lashing out” with a punch. He claimed that he was surrounded by the men and felt in fear and was acting in self-defence.

Vincent Heneghan SC, defending, told Judge Pauline Codd that his client accepts the jury verdict and that he indicated this to gardaí in court on the day the guilty verdict was delivered.

Judge Codd adjourned the case to Wednesday for sentencing after saying she needed time to read reports handed into court.

He has no previous conviction and the court heard his own mother was killed by a neighbour a few years earlier. The killer was later found not guilty by reason of insanity.

Mr Heneghan said his client was not a person who drank regularly but on the night he was very intoxicated, having consumed cocktails and double vodka drinks. Counsel said alcohol was not an excuse or a defence but it was a factor in the events.

Reading from her own victim impact statement Mr Mullaly’s widow Joan Shields repeatedly broke down in tears as she described the the effects of the “brutal” killing.

She said bringing their young daughter in the hospital to see her father one last time was the hardest thing she has had to do. Ms Shields’ described having to wait over three years for the case to come to trial.

When it did, her daughter asked “why is there a trial, did he not admit he hit Daddy?”. Ms Shields described reading a newspaper interview a week after the killing in which Dargan begged for forgiveness.

She said Mr Mullaly will now miss watching their daughter grow up and said “I’ll never be able to forgive him for that”.

Courtney Mullaly told the court that the violent death of her uncle has left many of the family suffering from anxiety, depression and PTSD.

She described the gut-wrenching loss and sadness of the family grief and said some family members have experienced suicidal thoughts.

She described the deceased as a “devoted Dad, caring brother, fun uncle” and “one of the happiest, friendliest persons you’d ever meet”.

She said the night of his retirement party was meant to be the first day of a new life but instead it became a shattering nightmare.

“He was killed trying to do the chivalrous thing. One person ripped several lives apart with his bare hands,” she said.

Mr Heneghan handed in a number of character references from family and employers and contacts from Dargan’s role as a martial arts instructor.

He said his client accepts fully his responsibility for the death of the victim but did not intend to kill him. When he heard of the death he immediately conveyed his apologies to the family.