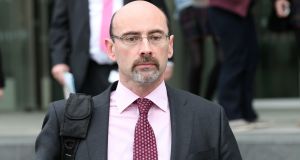 A former auditor of Anglo Irish Bank has said he was not aware at the time of the audits of documents which suggested that multi-million euro loans linked to Sean FitzPatrick were temporarily refinanced.

The trial at Dublin Circuit Criminal Court previously heard loans taken out by Mr FitzPatrick (68), his wife and family members increased from about €10 million in 2002 to about €100 million in 2007.

It is the State’s case that these loans were “artificially reduced” for a period of two weeks around the bank’s financial end of year statement by short term loans from other sources, including Irish Nationwide Building Society (INBS).

Dominic McGinn SC, prosecuting, previously told the jury the prosecution was about the alleged failure by the bank’s former chairman to disclose the extent of these loans to the bank’s auditors in the years 2002 to 2007. Mr FitzPatrick has denied all charges.

On day 85 of the trialVincent Bergin, who is a partner with audit firm EY (previously Ernst & Young) and who led the audit of Anglo for the years 2005 to 2008, continued his evidence.

Mr McGinn showed the witness documentation of deposit accounts, loan facilities and loan accounts in the name of the accused and his wife Triona FitzPatrick for the years 2005, 2006 and 2007.

They included letters from INBS offering loans for cash amounts in euro, sterling and US dollars.

These letters stated that the purpose of the loans was to refinance existing arrangements with Anglo.

The jury saw that by September 2007 INBS was confirming short term loans to Mr FitzPatrick and his wife involving tranches of more than €62m, $56m and STG£14m. In Anglo’s accounts in the same year, the total amount of loans to all directors of the bank was noted as being almost €41m.

Mr Bergin said he was not aware of any of these documents or financial transactions while he was in charge of the audits.

Mr McGinn asked him to comment on how the documentation would have affected the audit process.

“I think we would have asked follow up questions as to what exactly was happening,” Mr Bergin said. He said from the documentation it appeared to him that the accused was seeking short term loan facilities in order to refinance borrowings from Anglo.

He said he thought this would have been relevant to the audit.

“I think if someone was utilising loan facilities like that to pay down something with the intention of drawing it down again, I think that’s relevant to the audit,” Mr Bergin said.

Counsel told the witness it was a matter for the jury to find if there was a system of refinancing the loans but asked him to consider what he would have done if he had been aware of the documents.

Mr Bergin agreed that he would have considered various options, such as consulting with colleagues, discussing it with the bank’s audit committee or the potential need to report to the Central Bank or the Office of the Director of Corporate Enforcement.

He agreed it was difficult in hindsight to say how it would have been resolved and that it would have depended on the facts and circumstances at the time.

Mr Bergin also agreed that if the Directors Certificates or Letters of Representations provided by the directors to the audit team had disclosed refinancing this “would not have passed without consideration”.

He said he would have had to consider many complex legal, accounting and governance issues and he would have raised it in his audit report. He agreed that “various steps would have been considered up to and including resigning as auditors”.

Mr FitzPatrick of Whitshed Road, Greystones, Co Wicklow has pleaded not guilty to 27 offences under the 1990 Companies Act. These include 22 charges of making a misleading, false or deceptive statement to auditors and five charges of furnishing false information in the years 2002 to 2007. The trial continues before Judge John Aylmer and a jury.