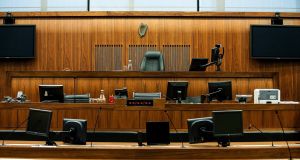 The Court of Appeal has rejected an application by several media outlets to be allowed to name a woman who smothered her three-year-old child to death with a pillow.

The woman was found not guilty of murdering her child by reason of insanity following a short trial in October last year.

Before her trial began, two High Court judges ordered the victim should not be identified and, as a consequence, the woman cannot be named as to do so would identify the child.

Paul Murray SC for the Director of Public Prosecutions had asked the judge to make the order saying Section 252 of the Children Act 2001 makes it an offence to publish anything that could identify a child who is an alleged victim of an offence, including a deceased child.

RTÉ, Independent News and Media, News Group Newspapers Ltd and The Irish Times had challenged that interpretation of the legislation.

On Thursday, the President of the three-judge Court of Appeal Mr Justice George Birmingham found that the judges had properly applied the law.

Section 252 states that in “any proceedings for an offence against a child... no report which reveals the name, address or school of the child or includes any particulars likely to lead to his or her identification... shall be published or included in a broadcast.”

Luán Ó Braonáin SC, counsel for the media outlets, had argued that “child” in the Act does not include a deceased person who died before reaching the age of 18.

He also argued that many previous cases involving child homicide had been reported on and no application was made by the Director of Public Prosecutions to prevent the deceased being identified.

The effect of the order, he said, was to protect the anonymity of the mother and not the child. Mr Ó Braonáin had also stated that the media’s entitlement to report on criminal trials is an important part of the Constitutional requirement that justice be administered in public.

Mr Justice Birmingham said it is “almost beyond argument” that the court proceedings were in respect of an offence against a child. He said it is not possible to interpret Section 252 “as not including a deceased person who was a child at the time of death.”

He accepted that the media may find the ruling “surprising” and a “radical departure from what had been a long-established practice”.

However, he added that the language in the statute is “clear and unequivocal” and if change is required that is a matter for the Oireachtas.

“While the outcome may not be a particularly welcome one, I am of the view that the interpretation of the section in issue by the High Court judge was correct, and accordingly, I would dismiss the appeal.”

His ruling also states that where a child is a victim of an offence but turns 18 before their trial is completed, the ban on identifying them would remain in place.