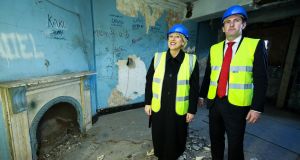 Then minister for heritage Heather Humphreys and then minister of state at the Department of Heritage Aodhán Ó Ríordáin at No 16 Moore Street in 2015. Photograph: Maxwell Photography

The Court of Appeal has reserved judgment on appeals aimed at overturning a judge’s declaration that buildings and sites on and around Moore Street in Dublin are a 1916 Rising battlefield site comprising a national monument.

The three-day hearing of the appeals concluded on Thursday and Mr Justice Michael Peart, Mr Justice George Birmingham and Mr Justice Gerard Hogan said they would reserve their decision and deliver it as soon as possible.

The Minister for Heritage and Dublin Central Limited Partnership (DCLP) – which bought some of the buildings and lands last year from another company, Chartered Land – appealed a series of findings in a 399-page judgment delivered in March 2016 by the High Court’s Mr Justice Max Barrett.

Mr Justice Barrett granted orders preventing works to the buildings and locations at issue after declaring they constitute a 1916 Rising battlefield site comprising a national monument.

The orders also apply to a terrace of buildings at Nos 14-17 Moore Street, where the 1916 leaders met for the final time and decided to surrender.

The Minister had argued it was adequate to protect only that terrace, where it is intended to establish a 1916 Rising Commemorative Centre.

Colm Moore, a nominee of the 1916 Relatives Association, brought the proceedings against the Minister, and Chartered Land – since replaced by DCLP – was subsequently joined as a notice party.

A core issue in the appeal is whether the High Court was entitled to make the disputed declarations and orders, which the Minister alleges are of “enormous scope” and with implications for her powers under the National Monuments Acts, in judicial review proceedings. Attorney General Seamus Woulfe, who appeared with Michael McDowell SC, for the Minister, argued the orders have prejudiced the Minister in the exercise of her functions.