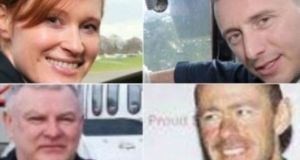 Preliminary inquests into the deaths of the Irish Coast Guard Rescue 116 helicopter crew a year ago when their aircraft crashed off Mayo are due to be heard next month.

It was confirmed on Wednesday by the coroner for North Mayo, Dr Eleanor Fitzgerald that the hearings, which will be of a preliminary nature, will be held in Belmullet Civic Centre on March 1st.

After initial matters are dealt with it is planned to adjourn the inquests to a later date.

“Dr Fitzgerald is hoping to be in a position to issue the coroners’ certificate of death which will allow the deaths be registered”, the coroner’s spokesperson said.

The crash at Blackrock Island, a rocky outcrop in the Atlantic, in the early hours of March 14th, 2017 claimed the lives of the four crew on board.

The bodies of Captain Dara Fitzpatrick and Captain Mark Duffy were recovered. However, those of winch operator Paul Ormsby and winch man Ciarán Smith remain lost at sea.

All inquests have a fact-finding purpose – to establish the name(s) of the deceased, when and where they died, the medical cause of their deaths (if known) and how they came by their deaths.