Man slipped into water at ‘treacherous’ spot after taking heroin 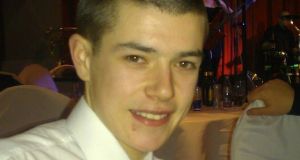 David McKevitt drowned after he fell into the River Liffey.

The mother of a young man who fell into a river and drowned after taking drugs has said injection centres would create safer conditions for addicts.

Olive McKevitt’s son, David McKevitt, drowned after he fell into the River Liffey on November 12th, 2015. The 20-year-old, from Lime Kiln Road in Walkinstown, Dublin 12, had recently taken heroin, an autopsy found.

“Injection centres would provide safe, clean environments for addicts where they have access to medical staff and counselling,” Ms McKevitt said.

At present, addicts attending drug treatment centres are targeted by drug dealers, Ms McKevitt said. “If they attend the clinics they are taken advantage of as they enter and leave, they are targets. They might want more than anything to give up, but it’s very difficult.”

Her son’s drug use had become a concern about a year before he died. Ms McKevitt had asked him not to use drugs in the house. As a result, David was sleeping rough, often in a tent in the Phoenix Park.

His friend Michael Keane gave evidence of “stashing” belongings at different locations around the city as the pair could not “carry everything everywhere”.

They left sleeping bags at Sir John Rogerson’s Quay the night David fell into the river. “David was walking ahead of me, I heard a scream and a splash. I jumped in and tried to save him . . . then I lost sight of him and it was killing me,” Mr Keane said.

Garda Keith Connor attended a call to the scene at 8.14pm and described the spot where David entered the water as “treacherous”.

“There is a sheath of green algae across the flagstones,” he said. The search and rescue helicopter based at Dublin airport conducted sweeps of the river, but Mr McKevitt’s body was not recovered until four days later. There was no CCTV footage available, Mr Connor said.

A postmortem report by Prof Eamon Leen found the man had high levels of heroin and the sleeping tablet Zopiclone in his system.

“The conditions there were such that anyone could have fallen in regardless of intoxication. This was a very tragic accident that lead to his untimely death.”