Man shot himself after girlfriend held at gunpoint escaped 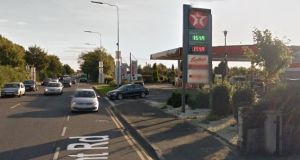 Garda Nevan Hartley had pulled into the Texaco filling station near the Spawell Roundabout in Templeogue, Dublin in a squad car and he observed a woman ‘sprinting into the station’, the inquest heard. Image: Google maps

A man, who threatened to take a woman to the mountains and kill her, shot himself after she escaped, an inquest heard on Thursday.

On the night of January 26th, 2015, Anthony John Ward (31) from Fr Kit Court, Crumlin, Dublin 12 called to his girlfriend Niamh Fitzpatrick’s home. Within seconds, he became angry and put a knife to her throat.

They drove to his sister’s house, and she tried to run, but he forced her back in the car, Ms Fitzpatrick told Dublin Coroner’s Court. He told her he was taking her to the Dublin mountains. “He had a gun in his hand,” she said.

At a Texaco filling station near the Spawell Roundabout in Templeogue, Mr Ward stopped the car and gave Ms Fitzpatrick €2 to buy a lighter. She ran inside and screamed for help, warning staff that Mr Ward had a loaded gun.

“He sped off as soon as he saw us,” the garda said.

Gardaí had received an earlier notification of an incident involving a man forcing a woman into a car near Crumlin.

Deducing the two incidents might be linked, Garda Mary Brophy of Terenure Garda station stopped a squad car on the Spawell Roundabout to observe Mr Ward’s approach. His car approached at speed from the M50 direction but hit the kerb, spun 180 degrees and stopped, Garda Brophy said.

Gardaí approached but retreated when Mr Ward stepped out of the car holding a handgun. The two gardaí collided in their rush to retreat and fell to the ground.

“Anthony Ward got out of the car with a small silver firearm in his hand. I heard a single gunshot and then I heard a voice say ‘he’s going to kill himself’,” Garda Brophy said.

She heard another shot and observed Mr Ward fall backwards. Mr Ward was taken to Tallaght Hospital where he died the following day.

The cause of death was a gunshot wound to the head, according to State Pathologist Prof Marie Cassidy.

A toxicology report found Mr Ward had traces of diazepam and cocaine in his system when he fired the gun.

The jury returned a verdict stating he took his own life.